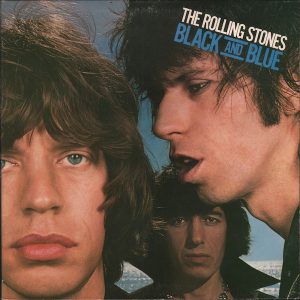 I could have sworn that “Hand of Fate” was a single, because I absolutely remember hearing it all the time on the radio back in 1976, but while I guess it’s possible that KYNO played it, I probably heard it on Rock 96 FM, which was an important bridge for me from the AM to the FM worlds for a couple of years there. It’s definitely one of those songs I knew backwards and forwards long before I purchased any Stones albums.

Before we get into all of that, we should probably level-set. A lot was going on in the world of the Rolling Stones. For one thing, Mick Taylor gave his notice at the end of 1974, so when the Black and Blue sessions started in Munich, they were framed as almost auditions. Which must have been weird to Ron Wood, who played on the 1975 U.S. tour that happened in between the sessions, making the final choice seemingly inevitable, even if some of the auditions continued to happen in Montreux, after the tour.

Obviously, 45 years later, Ron Wood was clearly the perfect choice — unlike Mick Taylor, he already looked like a Stone — and both Mick and Keith liked him enough that he could often smooth over things when they got pissed at each other, and his work with the Faces and on Rod Stewart’s first four solo albums had already given him a lifetime pass. So the irony is that he only played guitar on a couple of songs on Black and Blue.

So, for example, on “Hand of Fate,” its Wayne Perkins — a Muscle Shoahs session cat who overdubbed the spooky solo on Bob Marley & The Wailerdoubling Keith’s stellar riff at the opening as Mick sings a tale of being an outlaw-on-the-run.

But honestly, I don’t care about any of that: what I love about “Hand of Fate” isn’t so much the words, but rather the interplay between Charlie and Keith, and the rough vocals Mick uses to sing the song. Also, did I mention Charlie? He’s everywhere on “Hand of Fate,” my favorite bits being when he breaks into a double-time on the bridge.

Right after that, Perkins takes his first guitar solo, and it’s a barn-burner, pitched halfway between Keith’s low-key Chuck Berryisms and Mick Taylor’s flying pinwheels of light. A little bit later on, there’s a few bars of what is basically disco, lead by Charlie and Bill, and Perkins overlays his second solo, quick, sinuous and funky.

You’d think that would be enough, right? Nope, at the end of “Hand of Fate,” as Mick’s growl gets so exaggerated it’s like he cannot form words, Perkins throws out another long, thrilling solo that takes the song to its end.

That’s one hell of an audition right there, and in a weird way, it was almost too good: I don’t think Keith wanted another shit-hot lead guitar player, I think he wanted to go back to the ancient art of weaving, which of course is what happened with the next record.