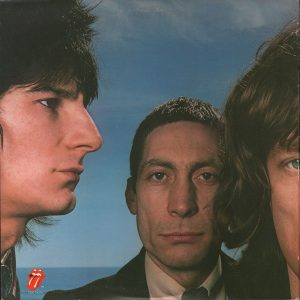 Black and Blue is a very divisive Rolling Stones album. Given that it’s only eight songs, they cover a lot of ground: rock, funk, reggae, soul, even jazzy blues. Not all of it is great: both “Melody” and “Cherry Oh Baby” are utter misfires and that’s 25% of the record right there. But “Hot Stuff” and “Hey Negrita” groove convincingly, “Crazy Mama” and “Hate of Fate” are better riff rockers than anything on the previous two records, and both of the soul ballads are up there with their greatest slow ones.

That said, I’m guessing that if you don’t love all 7:09 of “Memory Motel,” then you probably don’t like Black and Blue, but I’ve always been fascinated by it, which shocks me as much of anybody.

“Memory Motel” starts with Mick playing acoustic piano and Keith playing electric piano, over which Mick sings a tale of one of his conquests.

Hannah honey was a peachy kind of girl
Her eyes were hazel
And her nose was slightly curved
We spent a lonely night at the Memory Motel
It’s on the ocean, I guess you know it well
It took a starry night to steal my breath away
Down on the waterfront
Her hair all drenched in spray

I guess there really is a Memory Motel — or maybe was, because this was 45 years ago — in Long Island, and I’m guessing that Mick liked the alliteration. In the second verse, Hannah is playing his guitar, and in fact she’s the one who is singing the chorus.

And with Keith and Ronnie singing harmonies, Billy Preston adding some synth strings, and auditioning guitarist Harvey Mandel adding notes here and there, the chorus of “Memory Motel” is one of their lovelier creations, and by that time, you probably think you’ve got “Memory Motel” sussed: Mick is going to sing about all the times he banged her and they’re going to lean on the chorus. Which is why it’s always shocking when out of nowhere, Keith Richards starts singing.

To hear Keith’s voice, naked and vulnerable, this deep into the song, it’s . . . it’s a bit of a shock. For one thing, it meant that Keith was onboard with “Memory Motel” in a way that he was most definitely not with “Fool to Cry,” which by all reports, he disliked. For another thing, it was a nice framing device for Mick’s story about how she wasn’t just another one night stand. I mean, the truth is that Mick needed another part, and Keith had a part from a different song that matched up perfectly.

Keith also joins in on harmonies at the end of every other line, and it’s absolutely lovely, and not something that had happened for a couple of albums, either.

At some point Ron Wood joins in on the choruses, as well as a lovely round of “sha la la las”, but no guitar solos, or even keyboard solos. On the other hand, he’s on back cover of the album, so he wins! “Memory Motel” is basically wall-to-wall words, whether it’s Hannah singing “you’re just a memory,” Keith appreciating that she’s got a mind of her own, or Mick’s admission that — circumstances allowing — she coulda been so much more than a memory.

On the seventh day my eyes were all aglaze
We been ten thousand miles and
Been in fifteen states
Every woman seemed to fade out of my mind
I hit the bottle and I hit the sack and cried
What’s all this laughter on the twenty-second floor?
It’s just some friends of mine
And they’re busting down the doors

But alas, that’s all she is, a memory, as Mick, Keith and Ron are now singing to her over and over again, Harvey Mandel’s guitar crying tears in the background. And of course, and if you begin to think that maybe infamous lothario Mick Jagger is protesting too much, Keith comes back in one last time to remind us that Hannah has a mind of her own and she ain’t gonna put up with Mick’s shenanigans nohow.

I’ve always been shocked at how much I love this song, given its length, keyboard-orientation and overall maudlinity, but I well and truly do.