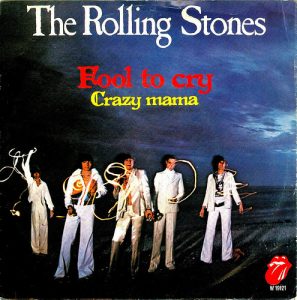 Look, I know that it’s utterly indefensible that I don’t really like “Angie,” but I love the equally cloying “Fool To Cry.” But here we are, I guess: at the beginning of their decadent period, the Stones rockers became quite rote, and the slow ones seemed to take center stage. I’m sure it all has to do with the depths of Keith’s heroin addiction, which on one hand didn’t stop them from releasing albums at a faster pace than say, The Who, but on the other hand meant that Mick was firmly in control, proving that the Stones needed both at full capacity.

That said, “Fool to Cry” had a lovely melody and lovelier singing, and if you’re gonna write a sad song about being depressed, then at least make it secretly witty, as well.

When I come home, baby
And I’ve been working all night long
I put my daughter on my knee, and she said
“Daddy, what’s wrong?”
She whispered in my ear so sweet
You know what she said? She said

In other words, Daddy, man up and stop being a pissy little bitch! Like “Memory Motel,” “Fool To Cry” initially starts off with Mick on keyboards, this time the electric piano, though he’s joined almost instantly by Nicky Hopkins, who plays both the acoustic piano and provides a synth hook that’s hard to get out of your head.

Also hard to get out our your head: Mick’s falsetto, which he double-tracks for extra power. Also adding to “Fool To Cry,” Wayne Perkins who provides a fluid lead guitar throughout the song, especially during the second half when Mick just repeats the chorus over and over and over while Charlie alternates between a straight beat, a half beat, and not really playing at all.

In the end, with Perkins overdubbing at least two guitar solos while being chased by Hopkins, Mick now screaming how much of a fool he is, and Charlie finally sticking to a single beat, “Fool to Cry” works up something close to momentum before it slams itself shut.

As it turns out, “Fool To Cry” was the biggest Rolling Stones single since “Angie” three years earlier, making it all the way into the top 10 in both the U.S. and the U.K,” though nowhere near #1 in each country, making people wonder what they had to do to top the charts again. The answer, of course, was disco.