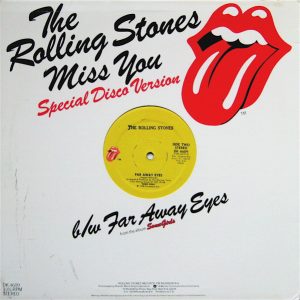 For the purposes of this post, when I discuss “Miss You” as a single, as a cultural phenomenon, or even as the lead-off track of Some Girls, I’m dealing with it in the abstract, could be any of these versions. But when I get to describing “Miss You” as an actual song, I’m going to be dealing with the “Special Disco Version,” because that’s the one I listen to. My blog, my rules.

There’s a scene in the final episode of Freaks and Geeks, “Discos and Dragons,” where Ken, the sarcastic guy played by Seth Rogen, walks into a bowling alley disco in order to try to dissuade his friend Nick (Jason Segel) from entering a dance-off to impress his new girlfriend Sara (Lizzie Caplan). In any event, the DJ, Disco Joel (Joel Hodgson) — who isn’t named, which is why I’m calling him “Disco Joel” — recognizes Ken as one of the guys who continually walk into the bowling alley disco at random times and yell “disco sucks” and decides to confront Ken about it. And at one point during the yelling match, Disco Joel brings up what he characterizes as the “new” Rolling Stones disco song, “Miss You,” and because Freaks and Geeks is set in 1981, and not only was “Miss You” three long years old by that time, it wasn’t even the the most recent Rolling Stones disco song, which was “Emotional Rescue.”

And yet, it also made sense, because “Miss You” was definitely one of — if not the — gateway drug between the “disco rules” and “disco sucks” crowds. Other rock-identified artists tried to do disco with, er, mixed results. (Obviously Blondie nailed it — but that was a year later — and disco was definitely in the veins of the Talking Heads, but those were exceptions. “D’ya Think I’m Sexy?” “I Was Made For Loving You?” Not even, man.)

As a dumbass “disco sucks!” teenager myself — I really didn’t have grasp of the socio-political roots and cultural implications of that phrase at 15, and I’m sorry about that — it’s entirely possible that my unabashed love for “Miss You” stemmed from hearing it on every single fucking radio station several times a day in the summer of 1978. In any event, not only did I come to love “Miss You”, even in its most truncated form, at some point I heard the “Special Disco Version,” as constructed by Bob Clearmountain, and it made even more sense.

“Miss You” starts in full flight: Charlie Watts’ kick drum up and center and on every single beat; Bill Wyman — who’d taken up Mick’s offer to go and do “research” (i.e. get laid) at the discos — has his bass bright and burbling. Meanwhile guests Ian McLagan on the keyboards and Sugar Blue on the harmonica go directly for the jugular by starting off with the hook. You know the hook. And as Keith and Ronnie start up on their guitars, leaving plenty of space for everyone else, Mick starts singing about (I think) Jerry Hall, the woman who was going dominate the next phase of his life.

I’m gonna say one thing here: the lyrics to “Miss You” aren’t Mick Jagger at his best. And, it doesn’t even matter, not really. Because it’s really all about the performance, so when he follows up that first verse with a “oooh-hoo-oooh-hooh-hooh” the words have already gone. On the Special Disco Version that’s followed by a weird, truncated “welll” and a short guitar solo by either Keith or Ron, though the attack suggests Keith. Either way, Keith and Ronnie join Mick to all sing “ahhh-ahhhhaaahh-aaah-ah-ah” as they go into the second verse.

In that second verse, Mick eventually launches into a ridiculous, er, rap, describing a phone call that’s supposed to cheer him up.

“Hey, what’s the matter, man?
We’re gonna come around at twelve
With some Puerto Rican girls that’s just dyin’ to meet you
We’re gonna bring a case of wine
Hey, let’s go mess and fool around
You know, like we used to”

Of course, the highlight of all of that is Mick’s ridiculous pronunciation of “just DYiiiiiiiiiiiiiin’ to MEECHEW!”, one of his funniest moments on record. Also, though, it turns out that’s like a third of the full rap.

I’m not going to transcribe the whole thing — and I couldn’t find it on any lyrics sites — but the gist is that the friend is very worried, asking Mick “what’s witchoo?” and declaring that “girls will come and go, they’re just like streetcars”, and eventually leading back into the main hook, and finally into the first chorus as the guitars almost get liquid.

This is followed by a breakdown, Charlie eschewing hitting his snare while he continues with the four-on-the-floor on his kickdrum and hi-hat. Reader, I can’t tell you how many times I’ve stolen this drumbeat or some close variation on it when I wanted to continue driving a song without a backbeat. Meanwhile Ian MacLagan dances his electric keyboards off the kick drum and Bill Wyman comes in all burbling and shit, and with a sigh and ah imitation of Charlie’s hi-hat, Mick whispers:

I’ve been walkin’ Central Park, singing after dark
People think I’m crazy
Stumbling on my feet, shuffling through the street
Asking people, “What’s the matter with you, boy?”
Sometimes, I want to say to, to myself
Sometimes I say

After that, Mick launches into another round of “hooooh-hooooh-hoooohs” while Charlie starts snapping his snare at exactly the right time, and full forward motion is achieved once again, as are the guitars, which start soloing in the background as Mick sings about not liking to sleep alone. At this point, “Miss You” becomes just a glorious mess of guitar solos, Bill Wyman doing weird and hooky runs — I can’t remember when he’s had more fun on a recording — Mick begging, pleading and falsettoing, Sugar Blue’s crying harmonica, and hell even Charlie is breaking up the beat just a bit because why not?

Eventually there’s one more verse — Mick is lying to himself — more “ahhh-ahhh-ahhh-ahhh” backing vocals, another chorus and even more guitar solos. It’s full sensory overload right up to the fade, and while it’s all probably more than necessary, I love every single second of it, especially all of Mick’s asides. Check out the live version from 1978 below if you want to know just how much fun the Stones had playing this song.

And of course, I wasn’t the only one. “Miss You” topped the Billboard charts at #1 for one week in the heart of the summer of 1978, displacing Andy Gibb’s “Shadow Dancing,” and being displaced by The Commodores “Three Times A Lady” (in case you were curious as to how much of a refuge it felt like when it came on the radio in the computer room at where I spent my summer days entering data for benefits administration company called Benefits Administration Company), and it is — to date, of course — the final single the Rolling Stones ever put at the top of the charts, and still one of the most successful rock-disco fusions ever recorded.