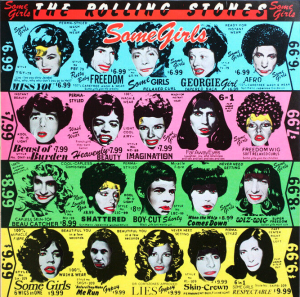 “When the Whip Comes Down” starts of with a Charlie drumroll, leading instantly into Keith, Mick and Ronnie’s interlocking guitars, somehow all together and totally distinct at the same time, as Mick sings the tale of a gay drifter who . . . well, I don’t really know. I’ve never paid much attention to the lyrics of “When The Whip Comes Down,” and Mick’s vocals are mixed even lower than usual. I know in the first verse, he uses a slur to distinguish how the drifter is treated in New York and Los Angeles, and i know later on there’s something about the shit hitting the fan, but honestly, it’s all about yelling “when the whip comes dowwwwwwn” over and over and over.

Oh, and jesus fucking christ, this band: every moment in “When The Whip Comes Down” is filled with somebody doing something amazing, especially as the song progresses and they all start feeling it. So Charlie does unexpected drum fills at unexpected times, Bill Wyman’s bass runs on the chorus are whips in their very own, and starting with an instrumental bridge where Ronnie plays a pedal steel lead, all hell breaks loose in the second half.

That’s also driven by Ronnie, whose slide guitar solo comes explodes out of the firmament about halfway through, yelling and screaming as it runs away from the rest of the band, though Bill is right behind him. After that solo, everybody screams “when the whip comes down” a couple more time — it’s never not fun: go ahead and do it right now — followed by an unexpected stop-time part led by Charlie, where everybody turns around on a fucking dime — Mick screamin “whoooo!” — before revving back up for the coda.

Which is a fucking monster: Charlie says “fuck this” and starts double-timing as the guitars roar every which way around him, everybody yelling “when the whip comes down” or not, depending. It’s utter chaos, and yet, completely controlled. No other band ever could get away with this song. Not even close. This, kids, is why the Rolling Stones were put on gods green earth: to crank out hot shit like “When The Whip Comes Down.” Yeah, I love the soul songs, I love the ballads, I love the country songs, I the pop songs, I love it all, but “When The Whip Comes Down” ranks with the very greatest rock ‘n’ roll songs ever recorded.

“When The Whip Comes Down”