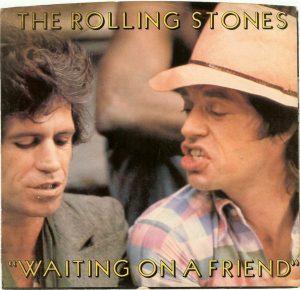 This particular show is infamous because it was one of the shows where the idiots booed and harassed Prince, who opened the show in front of George Thorogood and the J. Geils Band. I also remember it — as much as I remember anything from 40 years ago — as being a great experience, even if we were 50 yards from the Stones. But just take a look at the setlist: 18 of the 26 songs on that setlist are songs I’ve written about for this project, so you know I had a great time.

Given that they hadn’t toured since Some Girls, the setlist wasn’t too heavy on Emotional Rescue and Tattoo You tracks, featuring only two from the former and six from the latter (which I guess is more than half of the album), including the gorgeous final track, “Waiting on A Friend.”

Along with “Tops,” “Waiting on A Friend” is the oldest track on Tattoo You, having been initially cut all the way back in 1972 for the Goats Head Soup sessions, which led to a foofaraw over Mick Taylor either not getting credited or being wiped entirely from the track, depending on the source. The same can’t be said for Nicky Hopkins, whose piano, along with Keith’s quietly insistent guitar, dominate the early part of the track.

Given that Mick wrote the lyrics in 1980 with the eventual video in mind, it’s entirely possible that “Waiting on a Friend” was a bit of an olive branch to Keith, as they were going through a bit of a rough patch, though it was definitely a patch on the rough patch that lay ahead — which is why Tattoo You is filled with older songs in the first place. In any event, the lyrics of “Waiting on a Friend” are nearly as lovely as the vocal which is nearly as lovely as the melody.

At this point, Keith has joined in on the vocals — how could he not — coming he whenever he feels like it, as he does. And then, of course, there’s Sonny Rollins, the jazz great they got to blow not one, but two lyrical solos: one in the middle and one in the end as Mick and Keith gently sing “I’m just waitin’ on a friend” over and over again.

“Waiting on a Friend” was the second single from Tattoo You, and it made it to #13 on the Billboard charts, perhaps buoyed by the video getting played on the nascent MTV and perhaps not, as MTV didn’t really have full penetration (that was what the whole “I Want My MTV!” ad campaign was about), and has become one of their most beloved slow ones.

“Waiting on a Friend”