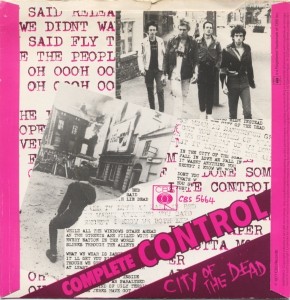 This is my favorite song by The Clash.

Thanks no doubt to legendary producer Lee “Scratch” Perry — who wouldn’t care a whit about lo-fi credibility — the sound of “Complete Control” is better than anything on The Clash. With new drummer Topper Headon’s kick drum leading the way, the guitars of Strummer and Jones are totally in sync, both equally pissed off.

And what are they pissed off at? Why, one of the biggest injustices that any band has ever had to deal with: their record label released “Remote Control” as a single without consulting them!!

They said release “Remote Control”
But we didn’t want it on the label
They said, “Fly to Amsterdam”
The people laughed but the press went mad

“Complete Control” is where The Clash declared — in both words and deeds — that they didn’t want to just make a record and burn out. They were in it for the long haul. And that’s why they were so pissed off. The only point in the long haul is getting to do whatever the hell you want. That’s what was at stake here. Only everything.

On the last tour my mates couldn’t get in
I’d open up the back door but they’d get run out again
At every hotel we was met by the Law
Come for the party – come to make sure!

Ooh ooh ooh have we done something wrong?
Ooh ooh ooh complete control, even over this song

And then Mick Jones takes over, uncorking a solo so powerful and classic that Strummer gleefully calls him on it: “You’re my guitar hero!“. Jones was pretty great on The Clash but you didn’t really notice him as a lead guitarist — he was the guy making the slightly more musical guitar sounds over Strummer’s primitive, er, strumming — but “Complete Control” is where he came into his own.

And with that, “Complete Control” comes to a crashing halt, with Jones playing a few notes while Strummer quietly murmurs:

I don’t judge you
Why do you judge me?

And as Topper provides builds, crashes and momentum in equal measure and Mick Jones provides a guitar that sounds like a fucking air-raid siren, Joe Strummer wants you to know he knows what you think about him:

Only you can tell by how he sings it that he not only knows how wrong that is, but he knows that you know it too. The world is changing everywhere, and it’s punk rock that’s going to be the agent of that change.

“Never gonna last?” Bullshit. More like last forever. And here come Mick Jones and Paul Simonon, to vocally back up their mate. And in doing so pointing out what this new world actually means for anybody with the balls to ask for it:

And with Mick coming in with an even better guitar solo than the first one and Joe devolving into intelligible gibberish while the chant of “TOTAL! C-O-N CONTROL” never wavers for even a second, “Complete Control” ends with one of the most powerful codas in rock ‘n’ roll history. Being able to do something like “Complete Control” was the reason they wanted that artistic freedom in the first place.

I bought “Complete Control” in 1979 after I’d had my head rearranged by the first two albums and was desperately scouring the import bins at Towers for all of these other singles I’d been reading about. If Give ‘Em Enough Rope and The Clash rearranged my head, then “Complete Control” blew it clean off, so much so that I had to order another head from the back of Trouser Press.