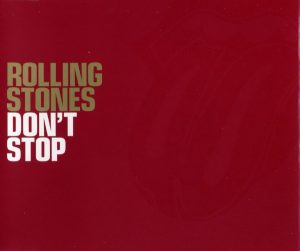 It goes without saying that Forty Licks is a killer compilation: of the 36 older songs on it, I’ve already written about 31. That said, the Stones also included four new songs, as was the style at the times. And one of them was good enough to rub elbows, at least, with the giants surrounding it.

That song was “Don’t Stop,” a Mick Jagger riff-rocker that felt fun, light, and hook-filled. Also a song that I completely missed back in 2002, but totally jumped out at me as I started going back to make sure I hadn’t missed anything. It might surprise you, but Mick Jagger is singing about sex here:

Well you bit my lip and drew first blood
And warmed my cold, cold heart
And you wrote your name right on my back
Boy, your nails were sharp

And as painful as all of this might sound, Mick doesn’t want her to stop. And to emphasize that fact, they invoke The Handclap Rule, as well as a couple of really nice Ron Wood guitar solos. Keith is around, but he’s mostly filling in, as this song is pretty much all Mick, though there is a nice breakdown near the end which allows Charlie to do a couple of trademark fills, to boot.

All in all, “Don’t Stop” shows that if people in in the early part of this century gave a shit about straightforward rock ‘n’ roll songs as pop songs, the Stones would still be topping the charts. But of course, they don’t, and “Don’t Stop” didn’t even graze the U.S. charts, though it did make it to #36 in the U.K.