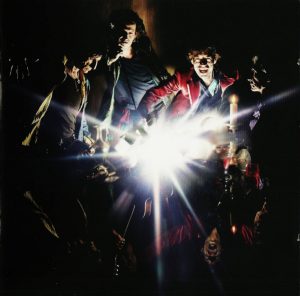 Way back in 1981, The Rolling Stones felt like they had to have a new album to tour, and thus Tattoo You was assembled from duct tape and bailing wire. In the 21st century, however, there is no such need, and new records from the Stones have essentially dried up even as they continued touring.

And so, suddenly, it’s 2021, and they’ve only released a single album of all-new material this century. I’m sure that some of you are fine with that, as the they’ve become a bit like The Simpsons: both institutions answer the age-old question of what if you loved something so much that you never wanted it to go away? And then it didn’t!?!

Thinking about it, I guess that The Simpsons are more like the Stones, given that their first episode aired in the same year that Steel Wheels came out, if you want to really know how old you are. Either way, you’re free to reject the late-period output of both institutions, if you want, just as long as you realize that late-period material doesn’t detract from the glory years — it’s just more if you want it, that’s all.

Oh, and just as there are still funny Simpsons episodes (no, really!), there are still great Stones songs, should you care to look. Like “Rough Justice,” the opening track to 2005’s A Bigger Bang, a record I liked more than any Stones record since Dirty Work, maybe even Tattoo You.

With Charlie battling throat cancer and Ronnie battling addiction, much of A Bigger Bang was worked up by Mick and Keith — Mick even played drums on the early versions of the songs — with Charlie, Ronnie, and replacement bassist Darryl Jones adding parts later on. Or not, as a few of the songs are down to three core original members.

And so A Bigger Bang is appealingly rawer than it’s predecessors, and — if you listen — full of good tunes, the best of which was the opening track, “Rough Justice,” featuring a cool rhythm riff from Keith, the usual great drums by Charlie, and a catchy chorus from Mick.

That chorus is accompanied by a patented Ron Wood slide guitar riff, playing call-and-response with the lyrics, and then occasionally going towards the stratosphere.

With long time pianist Chuck Leavell channeling Ian Stewart, the outro of “Rough Justice” is that ever-reliable Rolling Stones black magic: guitars and drums and keyboards and voices mixing it up for the zillionth time in a way that many of us have emulated over the centuries, but none of us can quite nail. Is it necessary, strictly speaking? Nah. But is it still as fun as hell to hear it? Fuck yeah.

Oh, and I should also shout out to the cover of A Bigger Bang, which harkened back to the classic covers of the early 1960s, while not even remotely shirking that they’d traded the acne spots for wrinkles or trying to disguise that the sullen young men had turned into devilish old men.