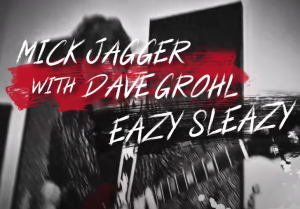 OK, so here’s some special bonus Stones content, which I’m writing about because of the timely subject matter, and the fact that tomorrow will mark the day that I’m fully vaccinated!

Also, I’m guessing that this song might have passed a lot of people by, because, so far as I know it’s only available as a video on YouTube: not on Spotify or iTunes.

In any event, “Eazy Sleazy” is Mick Jagger’s COVID-19 song — I don’t really count last years Stones single “Living in a Ghost Town” as it was a previously written song repurposed, and only OK to boot — and while the pandemic and lockdown affected someone as privileged as Mick Jagger far far less than it affected you or me, it wasn’t like it didn’t affect him at all. So he wrote what I think is a pretty funny song — maybe his funniest since “Shattered” — about the whole thing.

Looking at the graphs with a magnifying glass
Cancel all the tours, football’s fake applause
No more travel brochures
Virtual premieres, I’ve got nothing left to wear

According to a recent interview, Jagger had a home studio to write and record with — which in 2021 can be a laptop and a couple of mics, of course — and because the riff he came up for it was more of standard hard rock riff than it was anything else, he enlisted Dave Grohl to play drums, bass, and guitar. Because he could.

The result is a banger, featuring the patented Grohl drum whallop — no one quite hits their snares the way he does — throughout the verses, and with more of a laid-back chorus that’s catchy as fuck.

What I like about “Eazy Sleazy” is how it progresses through the stages of the pandemic, the second dealing with all of the things that Mick (or “Mick,” as the case may be) did to try to stave off the boredom of lockdown.

That’s a pretty mask
But never take a chance TikTok stupid dance
Took a samba class yeah I landed on my ass
Trying to write a tune you better hook me up to Zoom
See my poncey books teach myself to cook
Way too much TV, its lobotomizing me, yeah
Think I’ve put on weight
I’ll have another drink then I’ll clean the kitchen sink

And because he’s always been incredibly restless, some of it might even be true! Except, of course, that part about putting on weight. While it’s sweet for Mick to pretend that he’s in any way, shape or form like the rest of us, we all know that the one thing he did not do is put on the quarantine fifteen. But nice try.

In the final verse, Mick gets the vaccine — hey, he’s a senior citizen, so of course he should be first in line — and pokes fun at all of the idiot vaccine deniers and other conspiracy theorists, as well as some of the other stories that might have been bigger had we not all been dealing with the pandemic.

Obviously, the Bill Gates reference was written prior to the recent divorce announcement, but I do love that Jagger didn’t mind taking the piss on someone who gave him a shit ton of money for “Start Me Up” a quarter-century ago. In the end, having more fun than he strictly should be having, he even sings “everybody sing ‘Please Please Me'” because why the hell not, before ending it with one last “it’ll be a memory you’re trying to remember to forget” as Grohl pounds the song into final submission.