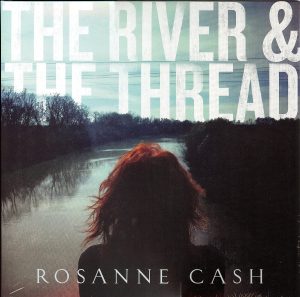 Right up my alley, of course, so it’s on me that much of her discography has still be unexplored, especially given how much I enjoyed the record that I finally did check out, 2014’s The River and The Thread. Mostly low-key, mostly acoustic, and completely unhurried, The River and The Thread got by on Cash’s still-potent vocals, not to mention her smart lyrics and smarter melodies. It was full of great tunes, like “The Sunken Lands,” “When The Master Calls The Roll” and the my favorite — because of course the radio song is my favorite — “50,000 Watts,” which starts with an amiable lope dominated by an electric piano and some nice harmony vocals.

It’s a hard road, but it fits your shoes
Son of rhythm, brother of the blues
The sound of darkness, the pull of the yoke
Everything is broken and painted in smoke

Of course, the lyrics are much darker than the performance, which is mostly upbeat — while remaining low-key and unhurried — and remains so as the song rolls easy into its chorus.

But there’s a light on Sunday, a new old desire
The sound of the whistle ‘cross radio wires
Love in your future, I’ll wait for you there
With 50,000 watts of common prayer

There are a couple of nice arrangement touches on that chorus. First off, the’s a quick stop time as Cash sings the first “50,000 watts of common prayer,” by herself. This is followed the next two “50,000 watts of common prayer” being sung by an approximation of a choir, adding a bit of heft to them, as well a doubling down on the “common” aspect of the prayer being blasted out through those 50K watts.

In a weird way, it’s a bit of a cousin to Joy Division’s classic “Transmission” where Ian Curtis commands an army of loners to “dance dance dance to the radio”, because in both cases, the singer is talking about a communal thing being done by people who are probably by themselves.

In any event, The River and The Thread was probably the most successful album Cash had issued since Seven Year Ache. While it didn’t spawn any hit singles, it did make #1 on the folk charts, #2 on the country charts and #11 on the Billboard albums chart, which is her best showing ever. Oh, and the album also won three Grammys, including “Best Americana Album,” so there’s that, as well.