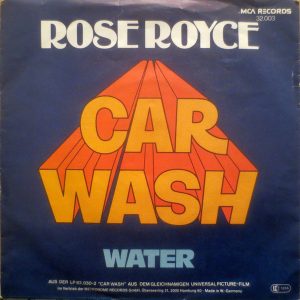 Doing the soundtrack for Car Wash was definitely a money gig for Norman Whitfield, the famed producer best-known for shepharding the Temptations into their amazing psychedelic soul phase, but he still took it seriously enough to come up with a stone classic in “Car Wash,” which he used to launch the career of a funk band he’d recently signed, Rose Royce.

And what a launch! Like future Certain Song “Papa Was A Rolling Stone,” “Car Wash” was a classic even before anybody even opened their mouth to sing, which is kinda like yesterday’s Certain Song, “Velveteen,” but in a completely different idiom, of course.

“Car Wash” has one of the greatest invocations of the Handclap Rule — handclaps make good songs great and great songs immortal — in all of pop history: a perfectly syncopated clap-clap, clap-clap-clap-clap-clap. Under the claps, Whitfield layered burbling bass, funky scratch guitar and hi-hat washes that eventually explodes into a full-blown beat, the handclaps now content to just stick with the backbeat.

Eventually singer Gwen Dickey — singing as “Rose Norwalt” cos somebody had to be named “Rose” so that the Rolls Royce pun wasn’t a lawsuit waiting to happen — comes in, singing all about, well, you know.

Look, it was the 1970s, so “Indian chief” was still OK. Maybe they were talking about the Village People. Oh wait, I’m being told that’s aged poorly as well. Anyways, armed with a catchy chorus — it’s impossible to get “working at the car wash, yeah” out of your head once it gets stuck there — “Car Wash” also gets over by being kind of unsparing about what it’s probably like to actually work at one.

As it was also paired with a hit film, “Car Wash” was virtually inescapable on the AM radio in the last part of 1976, and ended up topping the Billboard charts as well. Oh, and that opening is often played at Dodger Stadium, though I can’t exactly remember what the circumstances are. Maybe one of my Dodger fan friends can tell me?