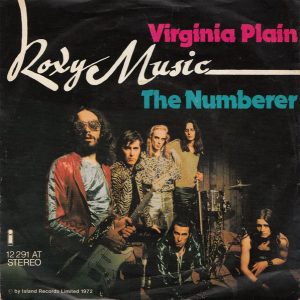 And, in fact, “Virginia Plain” was stuck on the U.S. release of Roxy Music, even if the single tanked here, and eventually when the album was released on CD in the U.K. in 1987, it was canonized as the fourth song on the album forevermore.

“Virginia Plain” quietly fades in from the ether, riding a billowing synth line from ol’ sourpuss himself, Brian Eno, and then exploding into forward motion driving by Bryan Ferry’s pounding piano and an, er, oboe riff from Andy MacKay, which trills around the entire song, becoming the main instrumental hook. Meanwhile, Ferry is singing about their career aspirations, as was required by the 1973 Glam Rock Rules and Regulations Act as written by Ian Hunter.

Make me a deal and make it straight
All signed and sealed, I’ll take it
To Robert E. Lee I’ll show it
I hope and pray he don’t blow it, ’cause
We’ve been around a long time
Just try try try try tryin’ to make make the big time

The “Robert E. Lee” referenced was not the loser Confederate general, but rather their entertainment lawyer. Also, while “Virginia Plain” doesn’t have a chorus, what it does have is a cool stop-time part at the end of each verse that breaks the song up just enough so make it seem like a chorus. And that one is accompanied by some Eno fuckery.

After the second verse, there’s a cool Phil Manzanera guitar solo, accompanied by Mackay overdubbing some sax over his oboe, as Ferry continues to sing verse after verse about a lifestyle that he would kinda of eventually achieve but for now was only a fantasy.

Flavours of the mountain streamline
Midnight blue casino floors
Dance the Cha-Cha through till sunrise
Opens up exclusive doors, oh wow!
Just like flamingoes look the same
So me and you, just we two, got to search for something new

It’s at this point where “Virginia Plain” halts its momentum for an incredible, yet simple, breakdown where Eno’s synths crash against the rest of the band for a few bars until Mackay and merciless drummer Paul Thompson kickstart i the final verse, which ends with the famous final couplet “What’s her name? / Virginia Plain,” as the song crashes to an end.

“Virginia Plain” wasn’t really structured at all like a proper single, and it was a really fucking strange so, to boot. And in fact, it was totally unlike anything anyone had heard on the radio up to that point. And while it naturally bombed here in the U.S., they totally ate it up in the U.K. in 1972, and “Virginia Plain” made it all the way up to #4, turning Roxy Music into unlikely pop stars over there, which pretty much held true for the rest of their career, as 10 of their singles — and all of their albums — made the U.K. top ten.