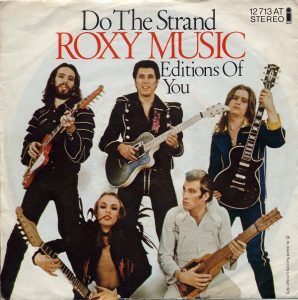 And, of course, like all of the albums from their early period, For Your Pleasure kicks off with a stone-cold classic, “Do The Strand,” which doesn’t so much start, but rather appear, as Ferry starts singing from the opening, accompanied by his own pounding piano and a slightly dissonant Andy Mackay sax riff.

“Do The Strand” was also the second song off of my beloved Greatest Hits album, and the way it leapt out from the stop-dead ending of “Virginia Plain” was incredibly disconcerting for quite some time.

“Do The Strand” basically alternates the piano/sax part with a full-band explosion, led by drummer Paul Thompson and bassist John Porter, as Phil Manzanera bounces guitar chords off the floor.

That would be a great chorus, especially with the momentum shift, but of course Ferry never sings it ever again, though he does bother to toss the word “Strand” into the last line of each of the fast part — including my favorite, “do the Strandsky” — so it’s almost a chorus.

There’s also a fantastic instrumental break in “Do The Strand,” a full-band freakout lead by Phil Manzanera’s Eno-treated guitar, that is utterly fabulous — you can tell they were learning their instruments, because instead of going for pure freak-out, they’re going for coherence, which is even better.

And of course songs about dance crazes are a classic rock ‘n’ roll trope, the funny thing about “Do The Strand” was that it while wanted to let you know who did the Strand — Louie XVI, Nijinksy, The Spinx, Mona Lisa — and went to great lengths to explain the benefits, as well as where and why to do it, he never bothered to tell you how the Strand even went. Which is pretty fucking funny.

However, because they were still into non-album singles for each album cycle, Roxy Music didn’t bother to release “Do The Strand” as a single in the U.K., where it would have no doubt would have done better than the non-album single they did release, the perfectly fine “Pyjamarama” (which still made #10). They did, however, release it as a single here in the States, to the sound of crickets.