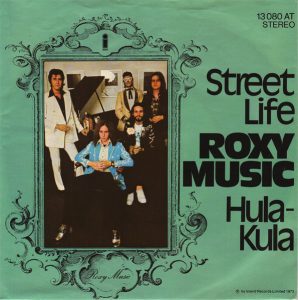 And so they replaced the famously not-a-musician Eno with his polar opposite, an incredibly talented muso named Eddie Jobson, who could play the synth and his awesomely cool-looking see-through electric violin with equal alacrity. And so while Roxy Music lost the full-blown avant garde aspect that helped define the first two albums, it certainly didn’t mean they were going to stop creating groundbreaking music. They still sounded like nothing else on earth, as the lead track from Stranded, “Street Life,” attested to.

Opening with a discordant keyboard riff by Jobson while drummer Paul Thompson fiddled with his hi-hat — a motif they’d go back to multiple times during the song — “Street Life” takes off with a long around-the-kit roll by Thompson and the sound of Phil Manzanera crawling his guitar around the rest of the instruments as Ferry sings the opening verse.

Apparently that opening verse is based upon Roxy fans calling Ferry and then hanging up, too chicken to actually talk to him, and it’s helped along by a weird jumpy guitar rhythm augmented by handclaps(!) and Ferry’s somewhat manic vocals. And in fact, I haven’t really mentioned Ferry’s singing too much during these posts, but it’s really striking during “Street Life:” check out his falsetto at the end of the third verse when, as the song stops, he sings “’cause loving you is all I can dooooooooooooooooooo”

Like most of the early Roxy singles, “Street Life” doesn’t really have a chorus, but at least it has Ferry (I assume) chanting “Street life” throughout the back half of the song, which turned out to be a pretty good hook. “Street Life” was the first Roxy Music single in the U.K. to also feature on an album, and it was a good call, as it showed both the album audience and the singles audience that Roxy could continue to bring the goods. And in fact, it both made #9 on the U.K. single charts and helped Roxy score their very first #1 UK album, cementing them as one of the biggest bands over there, even as they still couldn’t get a cup of coffee here in the Colonies.