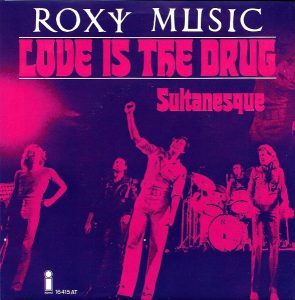 That said, Roxy Music still sounded like nothing else, not as long as Ferry was still singing, Manzanera playing the guitar, Mackay the sax and Thompson on the drums. And even if the lead track, the slinky fucksong “Love is The Drug” was defined by John Gustafon’s fantastic bassline, that bassline needed the rest of them to play perfectly around it.

And it needed Ferry’s vocal, especially on the final verse.

Lumbered up, limbo down
The locked embrace
The stumble round
I say “go,” she say “yes”
Dim the lights, you can guess the rest

The lasciviously hilarious way Ferry sings “you can guess the rest” has always killed me, from long before I could actually “guess the rest.” Also, it was amazing that Ferry got “cunt you see” pass the censors on the chorus.

And then there’s the most Roxy part of the whole song, which happens in the middle, and again at the end: a breakdown where Manzanera starts soloing, Gustafon lets off on the funk, and there’s a million overdubbed Ferrys singing “ooohhhhhhhhhhh ohhhhhhhhhhhhh.” Back when I heard “Love is the Drug” all the time on KYNO AM, that was my favorite part of the song.

Because yes, “Love is The Drug” was the song that kinda sorta broke Roxy Music in the U.S. I say “kinda sorta” because “Love Is The Drug,” only made it to #30 in the U.S., still their highest-charting single here. (“Dance Away” got to 44 and “More Than This” didn’t even crack the top 100. No really.) That said, Siren didn’t even chart as high as Country Life, so even a minor hit single didn’t help them here.

Meanwhile in the U.K., “Love is The Drug” stormed the top ten, making it all the way to number 2, the highest position a self-penned Roxy Music song ever reached, and topped only by their cover of John Lennon’s “Jealous Guy.”

“Love is The Drug”