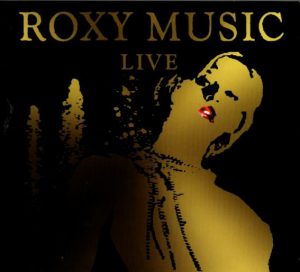 Anyways, by 2001, everybody was amenable to the inevitable booty call of a reunion tour. Everybody except for ol’ sourpuss Brian Eno and slightly younger sourpuss Eddie Jobson, neither of whom were asked. And so it came to pass that Ferry, Manazanera, Thompson and Andy Mackay did a tour in the summer of 2001, augmented by guitarist Chris Spedding, bassist Zev Katz, keyboardists Colin Good & Julia Thornton and Lucy Wilkins, who did the Eno/Jobson shit.

And, gang, the live album that resulted from that tour, simply entitled Live is really really really good, smoking on songs like “Re-Make/Remodel,” grooving on things like “Both Ends Burning” and sexing it up on the Avalon songs. It was a fantastic overview of their career, with combining obvious enthusiasm for the material with decades of well-earned professionalism.

And the song that jumped out at me was one that I’d completely missed, “Oh Yeah,” one of the singles from Flesh + Blood, an album that I never got around to listening to back in the day. The original single of course made the U.K. top five, but naturally couldn’t get arrested, even though it’s kind of a nostalgia piece.

Some expression in your eyes
Overtook me by surprise
Where was I?
How was I to know?
Ohh oh ohh

How can we drive to a movie show
When the music is here in my car?

Given its provenance, “Oh Yeah” is mellower Roxy, but on this live version, both Phil Manzanera and Chris Spedding put out some gorgeous jangle, and the plethora of background singer help but don’t overwhelm Ferry on an insanely gorgeous chorus.

Of course, “Oh Yeah” becomes “their song,” and of course they break up, but it doesn’t matter because that chorus is just so pretty. And in fact, it spurred me to check out Flesh + Blood for the first time ever. And it’s fine, though not as good as either Manifesto or Avalon, and while “Oh Yeah” is very pretty there, it’s missing the guitar jangle from the live version.

Oh, and while I couldn’t find the exact album version on YouTube, this version recorded at London’s Apollo Theatre on the same tour is essentially the same arrangement.