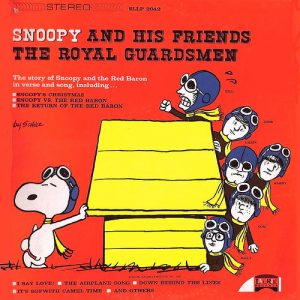 The Royal Guardsmen were a real band, based out of Florida, and specializing in cover versions of the current rock ‘n’ roll songs. If you’re curious, there’s a nice history here, but the upshot was that a local producer — a guy named Phil Gernhard, who later produced my beloved debut album by Jim Stafford — was trying to get one of the local bands to cut a song he had co-written with a guy named Dick Holler. That song was “Snoopy Vs. The Red Baron.”

For their part, the Royal Guardsmen were skeptical — their instructions were to make up a simple song with a military feel — so they cut a half-assed demo and were surprised that Gernhard liked their take. Not enough to give them writing credits, of course, but enough to record it in a real studio and released it in November 1966 on Laurie Records.

To everybody’s surprise, it was a huge hit, peaking out at #2 on the Billboard charts (blocked by “I’m A Believer” by The Monkees), and initially garnering the ire of one Charles M. Schulz, who as we all know, preferred jazz anyways. Schulz & his big eastern syndicate sued, won, and got a shitton of publishing money, but also allowed more Snoopy songs to be written and recorded, because of the shitton of publishing money.

As a little kid, it all seemed pretty natural to me, but Snoopy and His Friends is a deeply weird album. Side one features all three singles, but each single is preceded by a faux radio report that kinda sets up the song, even though the songs themselves are basically stories. It’s clear that they didn’t really have enough material for a full record, and so both “Snoopy vs. The Red Baron” and “The Return of The Red Baron” make their second appearances on albums, and because Charles Schulz was onboard enough to do the album cover art, enough parents bought it for their kids to make the whole thing worthwhile. I guess.

Oh, and side two was a bunch of Royal Guardsmen songs that weren’t specifically about Snoopy and the Red Baron, so I listened to it a couple of times maybe.

But I memorized those fucking faux radio reports, as well as the three songs, the greatest of which is still “Snoopy vs. The Red Baron,” which 50 years later, I still think is a helluva song.

Featuring the aforementioned martial drums, garagey guitars and organs, “Snoopy vs. The Red Baron” opens with some German ranting, as well as an opening verse that sets the scene.

And then as someone starts counting “eins zwei drei vier” over and over — a great hook in and of itself — the titular Red Baron is introduced, and check out how the lead singer wraps his pipes around “Baron von Richthofen.” It’s a thing of beauty.

Up in the sky, a man in a plane
Baron von Richthofen was his name
Eighty men tried, and eighty men died
Now, they’re buried together on the countryside

Also a thing of beauty, the utterly inescapable chorus, which is basically a death toll.

I mean, here’s the thing about “Snoopy Vs. The Red Baron:” it’s a fucking history lesson, and outside of all of the sound effects (and yeah, the “curses, foiled again!”), the performance is as serious and straight-faced as you could possibly imagine. Even the switchover from “eins zwei drei vier” to “hep, two, three four” in the third verse symbolizes the switch to Snoopy’s POV. And speaking of Snoopy’s POV, there’s never even a hint that they know or care that all of it is happening in Snoopy’s mind. Hell, I bet that you forgot it, too. But I guess that’s why Snoopy survives the third verse.

In the nick of time, a hero arose
A funny-lookin’ dog with a big black nose
He flew into the sky to seek revenge
But the Baron shot him down (Curses, foiled again!)

I mean, Snoopy was a puppy in the 1950s, and how Snoopy came to travel back in time and take on the Red Baron in the first place is not anything that is explained, not even in the goddamned faux radio broadcasts. He’s just a loyal Allied pilot taking his chances with the greatest pilot in history. On top of his fucking doghouse with his fists for guns. Which is also not addressed.

Meanwhile, the song goes into its first modulation as Snoopy figures his shit out.

Now, Snoopy had swore that he’d get that man
So he asked the Great Pumpkin for a new battle plan
He challenged the German to a real dogfight
While the Baron was laughin’, he got him in his sight

OK, this always bothered me: as described by Linus, The Great Pumpkin is a figure of sincerity and joy, bringing toys to kids all over the world on Halloween. So why would Snoopy go to them to find a way to basically kill the Red Baron? It doesn’t track with anything else we know about the Great Pumpkin.

That said, it must have worked.

Because, after an incredibly short interlude where they break into the “Hang on Sloopy” riff — apparently they intended to sing “Hang on Snoopy” but put the kibosh on that when they realized they’d have yet another copyright issue on their hand — there’s another modulation and we get the ending of the song.

Of course, Snoopy couldn’t have done anything as gauche as actually killing the Red Baron — and indeed, if this song was made today, there would be a run-out groove message that says “The Red Baron will return in ‘The Return of the Red Baron,'” — but of course, shooting him down was good enough for me, of course.

“Snoopy vs. The Red Baron”


“Snoopy vs. The Red Baron” performed on TV