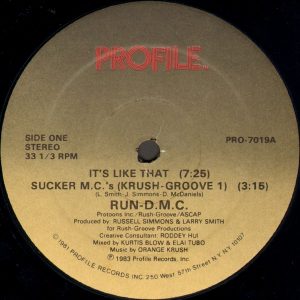 Unemployment at a record high
People coming, people going, people born to die
Don’t ask me, because I don’t know why
But it’s like that, and that’s the way it is

People in the world tryin to make ends meet
You try to ride car, train, bus, or feet
I said you got to work hard, you want to compete
It’s like that, and that’s the way it is

Those two guys were, of course, Joseph “Run” Simmons and Darrell “D.M.C.” McDaniels and along with their DJ, Jason “Jam Master Jay” Mizell, they had unearthed a whole new thing. They had help, of course, in the form of Josephs older brother, Russell, and Larry Smith, who had come up with the tough, spare beat in the first place.

But it was the MCs who put it all together, living in that void between being able to vote legally and being able to drink legally, hoarsely chanting the words at each other, breaking up the syllables so they’re far more of a rhythm instrument than a melodic instrument. Melody wasn’t the point early Run-DMC: running you over like a truck was the point.

And of course, that hurt “It’s Like That” on the charts: it was too weird and tough to graze the pop charts, even in 1983/1984, though it did make it to #15 on the R&B charts, but, of course anyone can see that hardcore rap started right there. And they were just beginning, of course.