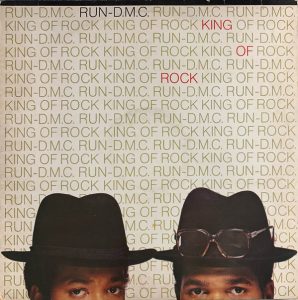 I’m the king of rock, there is none HIGHER!
Sucker MCs should call me SIRE!
To burn my kingdom, you must use FIRE!
I won’t stop rockin’ till I RETIRE!

What a statement of purpose! And backed up by the copious amounts of echo and big-ass beats layered upon by producers Larry Smith and Russell Simmons, completely and utterly convincing on every level.

And as guitarist Eddie Martinez blasts his way in, Joseph Simmons backs his buddy:

Now we rock the party and come correct
Our cuts are on time and rhymes connect
Got the right to vote and will elect
And other rappers can’t stand us, but give us respect

I think that one of the reasons I prefer “King of Rock” to “Rock Box” is incredibly simple. I like the riff better: it kinda reminds me of a Zeppelin riff circa Houses of The Holy or Physical Graffiti, which is of course a very rock guy way of looking at the song, but given that it’s called “King of Rock,” I’m guessing that’s at least part of what Run-D.M.C. was going for.

Every jam we play, we break two needles
There’s three of us but we’re not the Beatles
My name is Darryl, you can call him D
You can call me Darryl Mack, or you can call him DMC
People always ask, “DMC, what does it mean?”
D’s for “never dirty,” MC for “mostly clean”

Which is the other part of “King of Rock,” it’s funny as all hell, alternating boasts and disses throughout most of the song, until at the end it’s just one big long guitar solo by Martinez.

And of course, there’s the video, featuring Simmons and McDaniels wandering a kind of a Rock and Roll Hall of Fame (before the thing actually existed) accompanied by Calvert DeForest, known to many of us as Larry “Bud” Melmann,” a fixture of Late Night With David Letterman. Which given the demographics of Dave’s fan base, makes me think that their crossover targets were white college students like me. If so, target acquired and destroyed.

In any event, “King of Rock” probably got some airplay on college radio, and made it up to #14 on the Billboard R&B charts, but “King of Rock,” for all of its catchiness and big sound was still too rap for the pop charts. That would start changing soon enough, though.