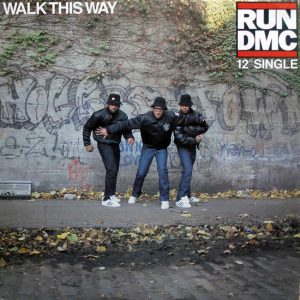 That said, I can totally see why Rick Rubin, now onboard to produce Run-D.M.C.’s third album, thought that a remake of “Walk This Way” — the opening beat already well-known to the band, even if the rest of the song really wasn’t — might be the crossover that even “King of Rock” wasn’t.

In 1986, Aerosmith was, of course, on the downside of their career, having pissed away their popularity in a blizzard of coke, band acrimony and increasingly piss-poor records. (Though I do have a soft spot for a couple of songs on 1985’s Done With Mirrors, the album where Steven Tyler and Joe Perry decided that their fates were better intertwined than apart.)

And so once Rubin got past Aerosmith’s manager with the proposal, apparently Steven Tyler was totally into it, but Joe Perry less so. In any event, the final result was exactly what Rubin wanted: a song that felt equally at home on rock stations and r&b stations, adventurous enough to be played on college radio and catchy enough to be played on pop radio.

Starting with Jam Master Jay’s scratching and sampling of the original drumbeat, and ending with Joe Perry adding a brand-new solo at the end, “Walk This Way” has a really cool arrangement. At first, it’s like a regular Run-D.M.C. track: Perry’s guitar is there of course, but Darryl McDaniels and Joseph Simmons dominate the first two verses to the point where unless you were listening for him, you really couldn’t hear Steven Tyler at all.

That all changes on the first chorus, where Tyler comes in with a series of absolutely shredded “walk this way, talk this ways”, after which is Perry’s first solo, followed by an absolutely epic third verse where Simmons, Tyler and McDaniels trade off words and syllables in a dizzying way, culminating with a breakdown to just vocals on “Then my next door neighbor with a daughter had a favor / So I gave her just a little kiss, like this” that remains equal parts breathtaking and a shit-ton of fun.

After that, Tyler was feeling his inner Steven Tyler-ness so much he even snuck in a “just give me some head” before Perry’s second (and nearly two-minute) guitar solo.

Or at least on the album version, because of course, Tyler’s filthy command was nowhere to be found on either the single or the all-text-and-no-subtext (but still funny) video that got played every five minutes on MTV, which helped to break “Walk This Way” everywhere. I’ve often wondered what the extras who made up the crowd in the video were thinking. Did they think it was weird? Did they think it was cool? Or were they just happy to get a paycheck for hanging around with other pretty people?: the single made it to #4 (topping the original, which stalled out at #10), it cemented Run-D.M.C. as the first true hip-hop superstars

As you know, “Walk This Way” was a huge deal: it made it to #4 on the Billboard charts (the original single stalled at #10), cemented Run-D.M.C. as the first rap superstars, put Rick Rubin on the map and revived Aerosmith’s career, as well.

Fan-made video for “Walk This Way”