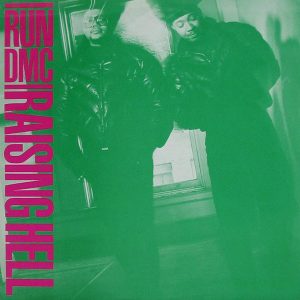 As always, the vocal interplay is insane, alternating between the harmonizing and trading off of words and — at least in part because that chorus is lifted wholesale from Toni Basil’s “Mickey” generally having more fun in the performance than the “stardom sucks” lyrics might indicate.

When I wake up, people take up mostly all of my time
I’m not singin’, phone keep ringin’ ’cause I make up a rhyme
I’m not braggin’, people naggin’ ’cause they think I’m a star
Always tearin’ what I’m wearin’, I think they’re goin’ too far
A girl named Carol follows Darryl every gig we play
Then D dissed her and dismissed her, now she’s jockin’ Jay
I ain’t lyin’, girls be cryin’ ’cause I’m on TV
They even bother my poor father ’cause he’s down with me

On paper, this is nearly Corganesque levels of whinging about stardom, but you never really notice that because you’re too busy admiring their flow, the big drum static rolls that punch through the song, and of course, the sample. Which is from “My Sharona.” And of course in 1986, it wasn’t cleared or anything, it just was.

That said, it took the Knack two decades to actually sue over it, and of course, rather than get the sample removed, they got songwriting credit.

“It’s Tricky” was the fourth single from Raising Hell, and it really didn’t do anything, stalling out at #56. That’s probably because everybody who was interested ran out and got the album, which went platinum within a couple of months and triple platinum within a year, the very peak of Run-D.M.C.’s career, though nobody really knew it at the time.