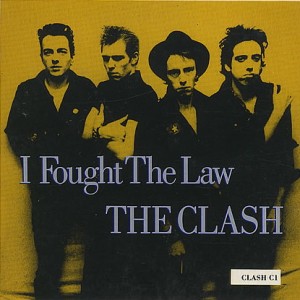 In my opinion, there are two types of cross-genre covers. One type is the ironic, sneering “we’re better than this stupid song” cover that was so prevalent in the early days of hardcore. You know, the “Hey ma look at us, we’re covering ‘Afternoon Delight!!!’ Isn’t that hilarious?” school.

It was kinda funny maybe the first time somebody did it, but not the 3,567,684,896th time. We get it. You’re more authentic than Starland Vocal Band. Congrats!

The second type is where the covering artist uses their own style to illuminate the cover and make it their own. This, of course, is difficult as all hell, which is why most bands don’t even bother. It was also one of the things that The Clash did better than any other band in rock ‘n’ roll history, as will be borne out by the sheer number of cover songs I’m including in the new couple of weeks.

While “I Fought The Law” is a great song in any incarnation — check the stellar Sonny Curtis and Bobby Fuller versions I’ve posted below — The Clash own it. While there is no question that they took their arrangement from Bobby Fullers — right down to the genius stop-time part accompanying “with a six-gun” — The Clash make it seem like there are some actual stakes involved.

From the very beginning, where they transmogrify Fuller’s surf-rock intro into a cacophony of rumbling drums and screaming guitars that make it sound like there are a thousand cops on their tail right this second to the very end where they joyously invoke The Handclap Rule while chanting the chorus over and over and over, they make their fight against the law into a lifelong struggle, not just a thing that happened.

And, you guys, I can’t even tell you how happy I was when this started getting played on KKDJ in the summer of 1979. Sure, it was a cover. And sure, it wasn’t something from either of their first two albums, but it was The Clash. On the radio. In Fresno!! Maybe it was the beginning of something . . .

The Clash performing “I Fought The Law” live in 1979

The Bobby Fuller Four performing “I Fought The Law” in 1966