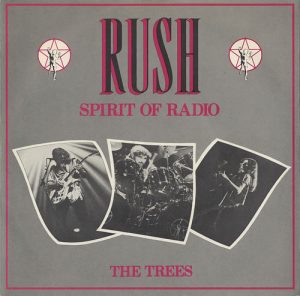 The thing about writing album-side long multi-part epics and/or concept albums is that they’re hard. Which is one of the reason that a lot of the biggest prog bands of the 1970s abandoned them as the 1970s crashed into the 1980s. Instead, they subsumed their considerable chops into shorter songs, some of which were pop songs, and in the cases of Genesis and — for one weird moment, Yes — incredibly successful pop songs. Hell, an entire band, Asia, formed specifically for this purpose.

By the way, this isn’t necessarily any easier. Genesis’s pop success was initially viewed as a fluke, even as they’d been traveling in that direction since Peter Gabriel left, Asia crapped out after their second album, and Yes were essentially one-hit wonders for the second time in their career. And, lets not let Emerson Lake & Palmer off the hook for their still dogshit Love Beach, which tried to “balance” six terrible pop songs on one side with a side-long epic that was somehow even worse. (And they didn’t do themselves any favors with that album cover, either.)

And so I’m going to slot Rush into this trend, because while none of their singles during this period were huge hits, they stopped making albums full of multi-part side-long epics, and their singles sounded fucking fantastic on the radio. For me, this starts with “The Spirit of Radio,” which just might be my favorite Rush song, for a number of reasons.

“The Spirit of Radio” starts of with a searing, sparking pinwheeling guitar riff from Alex Lifeson, which somehow evoked the feeling of tuning in a station that you couldn’t quite get clear enough, which then went into a second riff after which Geddy Lee sang the first verse.

Off on your way, hit the open road
There is magic at your fingers
For the spirit ever lingers
Undemanding contact in your happy solitude

While I’m always going to be in the tank for drummer-lyricists, especially if they’re Neal Peart or Grant Hart, this is one of my favorite Peart lyrics. I love the alliteration of “magic music makes your morning mood” as well as the evoking the two places where I, at least, listened to the radio the most: at home getting ready for my day and on the open road, maybe looking for something that would blow my mind. You know, like the chorus of “Spirit of Radio,” which offsets the pinwheeling riff with a counterpoint piece of percussion (I guess), and Peart mostly just working his kickdrum over which Geddy sings:

“Spirit of Radio” was written about Toronto’s CFNY, then a free-form radio station where people would play whatever they wanted. But the radio world was changing, and a lot of FM stations were getting more and more formatted, like, for example, Fresno’s KKDJ, which had started off totally and utterly free-form, but was slowly and inevitably succumbing to the inevitable “kick-ass rock ‘n’ roll” format. Where they would play a song like “Spirit of Radio” not when they wanted to, but when they had to.

All this machinery making modern music
Can still be open-hearted
Not so coldly charted
It’s really just a question of your honesty
Yeah, your honesty

One likes to believe in the freedom of music
But glittering prizes
And endless compromises
Shatter the illusion of integrity, yeah

I like this verse, because Rush were beginning to fully incorporate electronics into their sound — you can hear a synth in many spots on “The Spirit of Radio — and wanted to get out in front of any criticism for doing that. And Once again, extra points for “machinery making modern music,” and “illusion of integrity,” but perhaps a point or two subtracted by using the imperial “one likes to believe in the freedom of music” instead of the more personal “I like to believe in the freedom of music,” though at that point I don’t think Peart wasn’t really writing in the first person unless he was in character. And I don’t think “The Spirit of Radio” was anything but a heartfelt declaration.

Also, check out Peart’s double backbeat on most of that verse, building at the end towards the the second chorus.

After the second chorus, the sparkling pinwheel guitar falls down a stair and lands in the basement where they’re playing some reggae, and the lyrics get even more pointed, as they do a play on Future Certain Song “The Sound of Silence:”

And yeah, the crowd sounds here are cheesy, absolutely made for kids to cheer at that point during every single Rush concert ever again, but it’s counterbalanced by the “profits” pun as far as I’m concerned.

And of course, with the third screamed “salesmen,” Alex Lifeson takes an incredibly late solo and — with the help of some classic one-note rock ‘n’ roll pianner — drives “Spirit of Radio” to the end.

Now, I’m not going pretend that “The Spirit of Radio” was a massive pop hit, as it didn’t even crack the top 50, but I sure as shit loved it. And long after KKDJ went full on consultant-driven, Kirk & I did a promo called “The Real Spirit of Radio” which chastised them for jumping on the alt-rock bandwagon while still playing traditional album-oriented rock music, like Rush. If I recall correctly, we had the idea for the promo, but the only copy of “The Spirit of Radio” we had on hand was from the live album, Exit Stage Left. Which was fine, given how slavish that record was in making sure that the live versions sounded exactly like the studio versions.

“The Spirit of Radio” official video