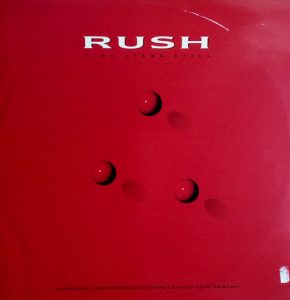 At some point in the early 1990s, I got a compilation via Columbia House called Chronicles, stuck “Limelight” and “New World Man” on a couple of the mixtapes I obsessively made for myself, and was secure in the knowledge that my days of discovering new Rush songs were over. But Rush didn’t care about any of that: they just kept making records. Less frequently in the 1990s, especially after Neal Peart was struck with the twin deaths of his daughter in 1997 and wife in 1998, and spent a bunch of time on the road on his motorcycle.

Eventually, they reunited, and recorded three more albums, the final one being 2012’s Clockwork Angels, by which time enough time had passed and the barrier to hearing it had dropped so precipitously, I figured I’d check it out. And I liked it enough — especially songs like “The Wreckers” and “The Anarchist” — to wonder what else I’d missed. So over the past few years, I’ve occasionally placed a Rush album into the mix — incurring at least some side eye from Rox — to see if anything stuck, going backwards from Clockwork Angels and then forward from Signals.

This was anything but methodical, and there are still whole Rush albums that I’ve still never heard — I’ll bet that holds true for most of you, as well — but I found that I enjoyed a lot of them, and it led me to discover a late 80s song that I’d been aware of at the time, but didn’t really hit me until just the last year or so: “Time Stand Still.”

I think maybe I remember “Time Stand Still” from when it came out in 1987, maybe I saw that terribly goofy video where they’re flying all around the studio while the chick from ’til Tuesday — the singer of a Future Certain Song which was at the time a guilty pleasure and is now just a pleasure — pushes a camera around the studio. And for some reason, the part where Geddy Lee sings the title echoed from the distant past, and when I put Hold Your Fire into the mix, I realized that I loved it. Weird how things work that way.

“The chick from ’til Tuesday” is, of course, the estimable Aimee Mann — and you can bet your ass I’ll be writing about the ever-amazing “Voices Carry” when we get there — who they hired to provide some counterpoint vocals on the chorus, an idea that Alex Lifeson had, and when they couldn’t get Cyndie Lauper (which wouldn’t have worked at all) or Chrissie Hynde (ditto), they recruited Mann, who worked perfectly.

That said, holy shit does this song have some crappy-ass 1980s production!!! Lifeson’s guitar sounds so incredibly thin and crystalline, buried in gauzy layers of keyboards, reverb and more keyboards, and Peart’s drums sound nearly as bad. It was possible to get great guitar sounds in the 1980s — just ask either Peter Buck or The Edge — but the fact that there’s any guitar on this song at all sounds more like a courtesy to Lifeson than anything else.

Which might be why it took me 30+ years to actually hear the the fantastic melody of this song, especially on the chorus, which initially features Mann singing the title as that counterpoint.

It’s a long, three-part chorus, with Mann doing some nice harmonies on “experience slips away” and some great stop-time crashing each time Geddy Lee sings “time stand still,” which is a plea, of course, that is always going to go unanswered.

In any event, “Time Stand Still” got some MTV play and did really well on radio stations I didn’t listen to, but Hold Your Fire was the first Rush album since Hemispheres not to crack the top ten on the Billboard album charts.

As for Rush, it turns out that Clockwork Angels was the last album they ever made, though they toured through 2015, a couple of years after they were inducted into the Rock and Roll Hall of Fame, and officially broke up in 2018.

And, of course, Neal Peart died in early 2020 from brain cancer, probably secure in the knowledge that he kinda sorta revolutionized not so much drumming, but the the image of what a drummer could be: a bookish intellectual who also loved to hit things. And even though I wouldn’t — and couldn’t, for that matter — play like him, very few drummers remind me more of why I love playing the drums: it’s the perfect expression of both mind and body in harmony. Time stand still, indeed.