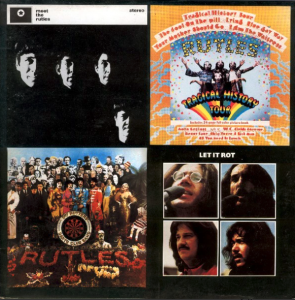 The one that has been lost to history, of course, is Mark Shipper’s tremendous alternate history novel Paperback Writer, which had enough balls to envision what would happen at their reunion, and is still one of my all-time top 5 rock books.

The one that everybody knows is Eric Idle’s almost-as-tremendous All You Need is Cash, which was a history of a fictional band called The Rutles, whose career path as the Pre-Fab Four was full of silly jokes, all-star cameos and shittons of wordplay. I assume that you’ve seen it at least once.

Crucially, Innes then worked with Monty Python, contributing to some of their great mid-1970s albums like Monty Python’s Previous Record and Monty Python’s Matching Tie and Handkerchief, both of which your humble correspondent basically memorized in the late 1970s. He also contributed songs and/or performed in Monty Python and The Holy Grail and Life of Brian, the latter of which remains an absolutely sacred text.

In any event, it was Innes songs that truly put All You Need is Cash over the top, as they were either pastiches of multiple Beatles songs or just straight-up parodies. Given that they also had to serve the plot of the film, the degree of difficulty was incredibly high, and for the most part Innes — who also played Ron Nasty, the John Lennon character — totally nailed it. My favorite is “Ouch!”, which took on “Help!”

What I liked about “Ouch” was that it kept the tricky call-and-response arrangement from “Help” while replacing Lennon’s plea for help with a set of lyrics that make more sense with the visuals — in the video, the band is jumping around a desert island and getting bonked by fruit — but at the same time, are still pretty poignant.

One of the the things I discovered while doing my patented half-assed research was that there is a Rutles Wiki, where somebody has helpfully explained the plot to Ouch!, in case you were curious.