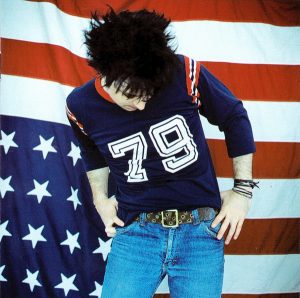 In any event “New York, New York” was Ryan’s biggest hit, making it to #18 on Billboard’s Adult chart, but it was not really enough of a turn-of-the-century pop song to even crack the top 100 pop charts, stalling out at #112. It’s also a perfectly fine song, though not really one of my favorites from Gold. Those would be the jaunty “Firecracker,” the epic “Nobody Girl,” which I love musically and dislike lyrically and the album’s unmitigated triumph, “Rescue Blues,” which blends folk-rock guitars, a gospelish choir and a second-person lyric that’s really a first person lyric.

With keyboards by Benmont Tench, and the rhythm section and crawling lead guitar provided by producer Ethan Johns — the son of the great Glyn Johns — “Rescue Blues” packs the feel of an epic song into just a little over three and a half minutes, getting bigger and bigger as it goes on. It peaks with the bridge, as Ryan’s voice breaks as he sings “that’s why they love to getchu hiiiii-hiiiiigh” as Johns’ guitar spins around and the choir — which includes ringer Adam Duritz — oohs and ahhhs in the background.

I just realized that “Rescue Blues” reminds me of the gospelish songs from Exile on Main St, and that’s pretty much the highest compliment I could possibly give it.