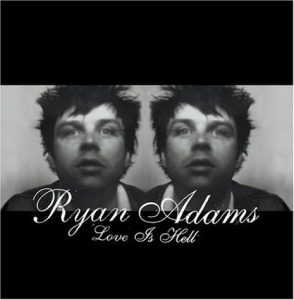 Somehow Ryan talked the record company, Lost Highway, into splitting Love is Hell into two EPs, the first one — Love Is Hell Pt 1 — was actually released the same day in November 2003, as Rock N Roll, and Love is Hell Pt 2 was released about a month later.

It, of course, made sense to keep the Rock N Roll and Love is Hell records as separate releases, but splitting Love Is Hell into two EPs just seemed . . . weird. Especially in retrospect: after it was clear that Ryan’s cover of “Wonderwall” (from Love is Hell, Pt 1) was the only song from either project to get any traction, the released Love Is Hell as a single CD in May of 2004, kinda sorta proving Ryan correct in the first place.

I, of course, preferred Rock N Roll, but probably my favorite track from either project was the grand and gorgeous “English Girls Approximately,” which follows up its Dylanesque title with some fantastic thin wild mercury music, but straightforward lyrics about his breakup with singer-songwriter Beth Orton.

Tall drink of water, she’s a Norfolk waterfall
Little day-breaker, she’s a shootin’ like a cannonball
Crazy like a rocket when you’re coming through my radio
Kept me in your bed till the wintertime turned to fall
Fall time coming, and I guess my little bird can sing
Come on Elizabeth, a come on a Bethany
Come on further, I’m tired and I want to sleep
My little dove flew, and I guess that she was done with me

With pianist Joe McGinty leading the way over Ryan’s continuously rising and falling acoustic guitar, “English Girls Approximately” earns the conceit of its title — to the point where there are backing vocals from quintessential English woman Marianne Faithfull — and is probably the best of all of Ryan’s Dylan rips.