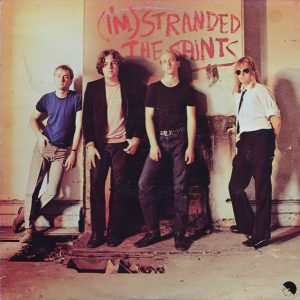 And why not? From the opening crescendo of Ed Kuepper’s muddy buzzing guitars over bassist Kym Bradshaw and drummer Ivor Hays, whose interplay is instantly recognizable as the song almost instantly goes into a couple of builds that set up the first verse.

You wouldn’t ever call Chris Bailey a great singer, but he’s got a great Iggy Pop sneer going on “(I’m) Stranded,” especially on the the chorus, which alternates the aforementioned build with a classic rock ‘n’ roll riff while Bailey lets us know his predicament:

‘Cause I’m stranded on my own
Stranded far from home, all right

To be honest, Bailey doesn’t sound all that broken up about being stranded, as his shout of “all right!” at the end of each chorus would indicate.

(“I’m) Stranded” doesn’t have any guitar solos or anything like that, but it does have a bridge which comes around in the middle and again at the end. It isn’t that much different from the rest of the song, but does kinda have a call-and-response part, all done by Bailey, and always resolving back into the chorus.

‘Cause I’m stranded on my own
Stranded far from home, all right

One thing I realized when I started this post is that I’m not sure I ever heard the full I’m Stranded album, unless I checked it out at KFSR at some point. Instead, I first heard “(I’m) Stranded” on the legendary Burning Ambitions punk compilation that I bought as an import at Tower at the end of 1982.

By that time, I’d definitely heard of if not heard “(I’m) Stranded,” as it was already a legendary song, despite not ever charting in the U.K. — even in Australia, it only got to #98 at the time — but all these years later it still sound like an absolute classic.