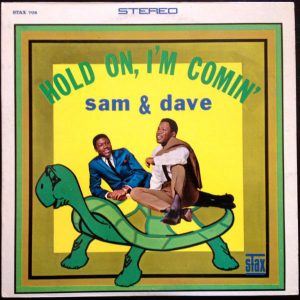 And in fact, at least for me, I’m so busy listening to that groove — kudos, as always, to Duck Dunn’s bass, both leading and following — I realize that I don’t know any of the words of the verses. But I sure as shit know the chorus, shouted in unison if not harmony by Sam and Dave.

And of course, you can just enjoy the chorus, that groove and those horns, but then you’d miss Booker T’s piano, Isaac Hayes’s (ahem) organ and Steve Cropper’s mixed way low guitar solo in the middle of the song. Either way, it’s a gut punch of a song — one of the greatest things ever produced by Stax, which is really saying something — and it was funky enough to top the R&B charts and catchy enough to peak on the pop charts at #21, setting Sam & Dave up for the bigger successes to come.