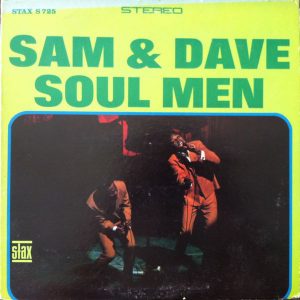 This is probably a generational thing, but, as it turns out I was first introduced to this song by The Blues Brothers, because of course I was. And I had kind of a complicated relationship with the Blues Brothers. As a 1970s teenager, I watched Saturday Night Live from its inception, and always enjoyed the appearances of The Blues Brothers on the show.

And a couple of years later, The Blues Brothers (1980) started its run of my all-time favorite film that I objectively recognize as bad. But in between those was Briefcase Full of Blues, and I absolutely hated that record. Sure, it was cool that John Belushi & Dan Ackroyd (and let’s face it, Paul Shaffer) were able to get Steve Cropper, Duck Dunn and Matt “Guitar” Murphy to play on their record, and Steve Jordan is as good of a simulacrum of Al Jackson, Jr as you could image, but let’s face facts: John Belushi was not a r&b singer.

Naturally, that didn’t matter to the masses, because their rendition of “Soul Man” was all over the radio in 1979, and while part of the rationale was that Briefcase Full of Blues would turn white teens like me on to great 60s blues and soul sides, in the case of me and “Soul Man” it was the exact opposite: it was years before I bothered to seek out the original.

Which, of course, is a great track, duh. Written once again by Isaac Hayes and Dave Porter, “Soul Man” opens with a cool Steve Cropper fanfare over a kick drum and tambourine, before the song proper kicks in, riding Cropper’s chickenscratch guitar and the reliably solid Mar-Key horns. Over all of this, Sam Moore sings the braggadocio opening verse.

Comin’ to you on a dusty road
Good lovin’, I got a truck load
And when you get it, you got something
So don’t worry, cause I’m coming

Heh. A “truck load” of good lovin’. And why can Sam boast all of this? Because as he (and Dave Prater) assert on the chorus: he’s a “soul man.” Damn straight.

If’s also a fantastic chorus: Al Jackson, Jr changes the beat from strut to drive, and each time they exclaim “I’m a soul man,” either the horns or Steve Cropper’s guitar answers them, prompting Sam to ad-lib, “play it Steve,” which Belushi dutifully (and painfully) recreates in their version.

All of that would be enough — a couple of verses of boasting, that great chorus, Cropper killing it throughout — but “Soul Man” has one more surprise near the end: a killer bridge, Sam singing:

Well, grab the rope and I’ll pull you in
Give you hope and be your only boyfriend
Yeah
(Yeah)
Yeah
(Yeah)

The trade-off between Sam & Dave on the “yeah, yeah, yeah, yeah” part is quick but thrilling (a song title that would never occur to Isaac Hayes), and leads to a breakdown reprise of the opening Cropper fanfare, after which Sam & Dave reiterate their bona fides as the titular soul man until the fade.

“Soul Man” was an absolute smash, topping the R&B charts and making it up to #2 on the Billboard Charts, blocked only by Lulu’s massive smash “To Sir With Love.” So, you can see why The Blues Brothers might want to re-record it, though they were neither the first nor the last, as artists as varied as Paul Revere & The Raiders and Prince have covered it over the years, including Sam Moore and, yup, Lou Reed, as title track to a film that should have never been made under any circumstances.