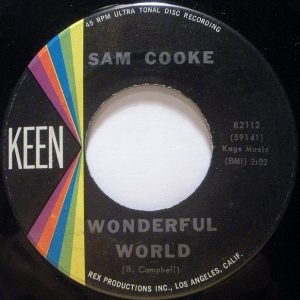 And the amazing thing is that absolutely none of that driven quality ever came out in his best songs, which were often deceptively simple, and — the ones I love, anyways — pretty sparse. Yeah, there were a lot of big band overarrangements throughout his career, but as the 1960s got rolling, he saw the writing on the wall and his music was getting tougher.

So we pick up the story at the very dawn of the 1960s, and one of his simplest, prettiest songs, “Wonderful World,” which is basically just long-time Cooke guitarist Clif White’s quietly jangling acoustic and drummer Ronnie Selico’s quietly jumpy snare beat.

That’s such a perfect lyric, isn’t it? “Wonderful World” was originally written by Lou Adler & Herb Alpert, but Cooke revised the lyrics to all be the contrast between his character’s lack of formal learning and the one thing that character does know: all he needs is their love. The irony here, of course, was that Cooke was actually a voracious reader

One of the things that Cooke gleaned from his gospel days was an ability to effectively deploy backing vocals, and “Wonderful World” is a master class in how to do it, as the backing vocalists — Lou Rawls, Cooke’s business partner J.W. Alexander and George McCurn — come in at the end line: “history,” “biology,” adding both heft and beauty to the song.

In the second verse, Cooke goes on about some more subjects he proclaims to be ignorant of — geography, trigonometry, algebra, what a slide rule is for — and then proclaiming all of that higher math ignorance, tops it with another killer variation on the chorus.

At the end, the background singers just keep repeating all of the various school subjects while Sam soars above them with series of “cha-cha-chas” showing off his once-in-a-million year voice before joining them for one last chorus.

“Wonderful World” was Sam Cooke’s biggest hit since “You Send Me” way back in 1957, topping at #12 on the pop charts and #2 on the R&B charts, but sure as shit feels like a standard now, having been recorded enough times that it was definitely one of the reasons that co-writer Lou Adler used to sit next to Jack Nicholson at Laker games.