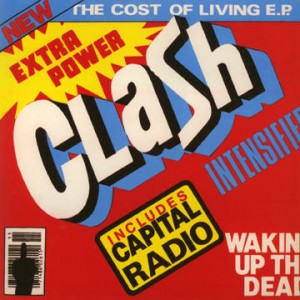 And as such, the original “Capital Radio” is slotted into the “Punk Band Rails at The Man Who Won’t Help More People Hear The Music That is Trying to Destroy Everything The Man Stands For” sub-genre with such songs as “Radio Radio” and “The Unheard Music.” But even The Clash knew it was kinda slight, so they never officially released it in 1977. It eventually surfaced on Black Market Clash in 1980.

But in 1979, it had became rare enough — and The Clash big enough — to command huge prices at second-hand shops. So The Clash decided to re-record it for The Cost of Living EP, and in doing so, showed just how much they’d progressed in the two years since the original recording. And it wasn’t just the expected musical progress, but a quantum leap in their sense of humour, especially about themselves.

With Mick Jones adding a fingerpicked acoustic guitar intro and a police-siren lead guitar throughout the song, “Capital Radio Two” still wouldn’t be much to write home about except for the hilarious breakdown at the end. After Mick sings “Capital ray-deee-oooo” a few times for the chorus, St. Joe Strummer interrupts him and quiets noisy guitars so he can pontificate:

Hey you guys! C’mon on! Jonesy!!!
(Yeah, what?)
Hey listen, I’ve been thinking.
We’ll never get on the radio like this!
You know that?
Now, I’ve been studying the charts, using my mind and my imagination.
And I can see it all now.

The drummer’s in the box office and he’s carrying all the money!

And at that point, Topper Headon snaps off a long, building drumroll and The Clash explode (complete with an explosion sound effect) back into the song, as powerful as they’ve ever been on record. And over the din, Joe gleefully continues:

And with that the song devolves into a faux-disco beat with Mick Jones echoing his lead guitar over it, Joe Strummer continues making fun of radio (“I’m the one that I want”) until the song fades out. Except that on the original EP, it doesn’t fade out. Instead added one last bit of fun: the “I Fought The Law” riff starts back up, and over a reprise of its chorus, Joe Strummer has another — completely different — rap for us:

Whoaoaa!
Jack and Jill!
Are you listening to me now because my name is Eraserhead, and I can rub you out.
And I’m standing here to day to tell you all, give you the hard sell because The Clash Cost of Living EP is now at your nearest Clash showroom!
So all you people now!

And so the Cost of Living EP ends with an advertisement for itself, and all I could do in the summer of 1979 was wonder what in the world this band could possibly do next that would be better than what they’d already done. Within months, I would find out.

Fan-made video for The Cost of Living EP advert