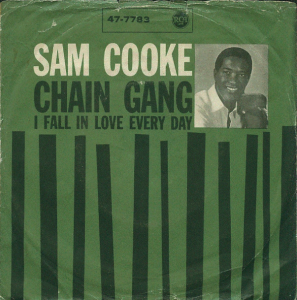 But, actually, it’s not just the phone book, which is a neutral thing: Sam Cooke had the ability to sing something like “the tests are back / And you’ve got the cancer, oh well / And I know for a fact / Pretty soon, you’re going to hell” and you’d be like smiling and nodding the whole time.

That’s most certainly what happened with one of his most-enduring songs, “Chain Gang,” which was in fact, inspired by Sam and his brother Charles encountering an actual chain gang working on the side of the road.

And so “Chain Gang” opens with the backing vocalists grunting “hoo . . . hah” as somebody hit the mic stand with an actual chain — an instantly memorable sound effect — over a light and lilting beat anchored by longtime guitar foil Clif White — that wasn’t so different from “Wonderful World,” jumping straight into the chorus with a basso “well don’t you know.”

And while Sam is definitely on top of the vocals during that chorus, he’s at least doubled up, as well joined by the backing vocalists, all of which add to the ethos of the song: they’re quite literally all in it together.

“Chain Gang” has a very weird structure: there are two different repetitions of boy the “hoo . . . hah” part and the chorus before — accompanied by a soaring string section — Sam finally sings the first verse.

All day long they work so hard till the sun is going down
Working on the highways and byways and wearing, wearing a frown
You hear they moaning their lives away
Then you hear somebody say

This is pretty dark stuff, but it never feels like you’re being beaten over the head with it, because it’s all so incredibly beautiful. And there is no respite in the song, in the second verse Sam puts himself in the head of one of those men, and his dream of going home, but there’s no question that it’s only a dream.

In any event, “Chain Gang” was an absolute smash, his first song since “You Send Me” to crack the top 5, eventually peaking at #2 in the U.S. and #9 in the U.K., the first time he cracked the U.K. top 10. Also: “Chain Gang” was probably the first Sam Cooke song I well and truly loved, and during the KFSR days, I used to play it back-to-back with the Pretenders’ immortal “Back on The Chain Gang.”