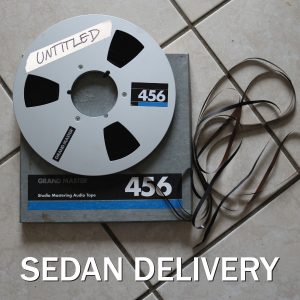 But the most important thing of all: it was fun. While we had a list of songs we wanted to get through, we’d also just played a couple of gigs, which has a tendency to get everybody to focus on their parts in a way that just rehearsing tends not to do. And, we also had no real timetable, just the feeling that it was time to get all of these songs we’d learned and re-learned finally properly recorded.

And so we ripped through most of our album, two or three takes max, stopping only to drink beers and cook steaks, and at the end of the day we’d gotten basic tracks for nine of our songs. Hell, we completely finished “Emily’s Garden” that day, and we never touched it again. And of course one of those nine songs was Joseph’s harrowing “In The Rain,” which Joseph, Doc & I played together at our very first show in May, 1989, and very nearly every subsequent one, as well.

“In The Rain” starts with Doc playing the opening pinwheel riff on his 12-string Rickenbacker, with the rest of us crashing in almost immediately while Doc continues to play the riff. At first, I’m playing nothing but my high-hat and kick, then I bring my snare in and soon enough “In The Rain” hits its full velocity as a massive, anthemic song about the very moment when your heart gets broken.

I remember gray skies falling & the miles stretched out between each side of town
I had no sense of direction, just the feeling I was slowly sinking down
It was midnight in the city, I can’t tell you but I knew what had begun
I was thinking I was crazy for not doing what I knew I should have done

A couple of cool things going on here: as Doc is chiming with the 12-string, Don is playing crawling licks on his six-string, my favorite of which is a little curlicue lick at near the end of the second and forth lines of the verses.

And then, with no warning, just after Don finishes the curlicue lick, it’s chorus time where I switch to a “Be My Baby” beat for maximum drama. Why this became the arrangement of “In The Rain” is lost to the mists of time, but we were probably looking for a way to draw attention to the chorus. On the recording, you hear what sounds like extra percussion just before my drumroll before the first two choruses, and that’s because I totally fucked it up on the day of recording — a thing I’d been doing since 1989! — and Joseph spliced in my drumroll from the end of the guitar solo, in which I play the hi-hat open, for reasons we’ll discuss below.

I stood watching, remembering, with no chance to explain
My time was ending on a January morning
In the rain

And as Joseph sings “January morning” everybody else drops out but the kickdrum, and as he sings “in the rain,” the build towards the second verse begins. Which is probably my absolutely favorite verse Joseph has ever written.

Have you ever been so sure you could not fall you never bothered to look down?
And then sure enough you stumble and the next thing you knew, you were on the ground
I threw away so much I never even knew I even had to lose
I learned too late you’d never wait around for me to get things straight and choose

There’s a neat lyrical trick here: where he goes from universalizing his situation by asking the listener if they’ve ever been in his position — which we all have, of course, since you don’t miss your water til the well goes dry — and then zipping right back into his confession of his own culpability in the breakup. Brutal.

Also, the internal rhyme in the last line — “late,” “wait” and “straight” — is just fucking brilliant as well.

After the second chorus, there’s another build with Doc playing harmonics with the 12-string, Joseph ping-ponging two notes on the bass while I’m splashing my cymbals every which way. And then with a crack of the snare, it’s time to hear exactly what that rain sounds like. And it’s a downpour, a torrential flood of notes from Doc’s 12-string that well and truly captures getting drenched in a storm. I’m trying to help out, by playing with my hi-hat open, as the howling wind accompanying the rain.

Whether that comes across, of course, is unclear. People might just be wondering what that swishing noise is underneath the guitar solo. After the solo, there’s one last chorus that brings “In The Rain” to its end.

When we first released Untitled on Bandcamp, we thought it made sense to put the big anthem at the end of the album, betraying our age, since nobody listens to full albums anymore. This was against the advice of a couple of friends, who knew better. So when we put the physical version out into the world, we jiggered the track listing so that “In The Rain” was the first song that people heard.

We won’t be making that kind of mistake with the second album.

“In The Rain” Official Music Video