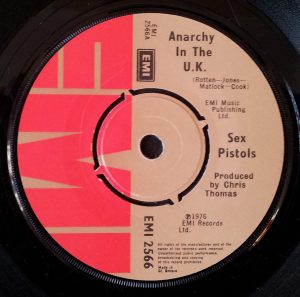 Which is why the whole fucking album blew me away: to this day, it’s one of my all-time favorite albums, a massive blend of cranked up guitars, never-ending drums and of course, Johnny Rotten’s vocals, powered by the anger of someone who so sure he’s right, he doesn’t even care that he might be wrong. And of course, the secret ingredient — a shit-ton of melody, thank you very much Glen Matlock. The noise, the politics, the anger, the unrelenting unrelentingness of it all may have been too much for too many people, but to me it’s always been exactly the right type of overwhelming.

That said, I’m sure when “Anarchy in the U.K.” came out in late 1976, it seemed like a transmission from an alien planet, just exploding out of the block with Steve Jones noise-filled guitar, Paul Cook’s drum rolls and Rotten snarling “RIIIIIIIIIIIGHHHHT NOW” followed by that evil cackle.

Now that, ladies and gentlemens, is a statement of purpose, especially when delivered with Rotten’s wild-eyed conviction.

‘Cause I, I wanna be anarchy!
No dogsbody!

But listen to the melody, augmented by the way that Rotten holds out “Iiiiiiiiiiiiiiiiiiiiiiii” and “anarchiiiiiieeeeeeeeeeeeeee”, which are not just massive hooks but utterly amazing singing. Oh, and a “dogsbody” is someone who performs shitty duties. Which, of course, wasn’t going to be Rotten.

Anarchy for the U.K. it’s coming sometime and maybe
I give a wrong time, stop a traffic line
Your future dream is a shopping scheme

That said, his actual examples of his anarchy aren’t all that terrible: giving somebody the wrong time? Oh noes! Also: would you walk up to 1977 Johnny Rotten and ask him for the time? He probably wasn’t even wearing a watch! But, of course he’s singing it so fucking hard, you might not even notice. But what you might notice is the harmony vocals on “I wanna be”, one of the perfect examples of the great conundrum of the Pistols: they were using the past to try to destroy the present. Harmony vocals!

Which is followed by the first of two stormy Steve Jones guitar solos. This one he repeats soaring trebly notes with acres of feedback squalling all around him, leading in the the next verse where he’s playing ringing noise behind Rotten.

How many ways to get what you want
I use the best, I use the rest
I use the N.M.E
I use anarchy

‘Cause I, I wanna be anarchy!
The only way to be!

This is followed by Jones’s second guitar solo, a stormy thrashing of chords that cuts across the rest of the song, while Cooks pounds and rumbles behind him, and sets up the final verse, feed bombs bursting all around Rotten as they roar into the final verse.

And in this case, it’s Rotten — with the harmonies — holding out those long notes:

“Anarchy in the U.K.” was, of course, too much too soon to be a massive pop single, especially since two months after it was released, their label, E.M.I., infamously dropped them for cursing on national TV. Which of course led to another song, since Rotten was able to take pretty much any personal slight and turn it into lyrics.

But, of course, it’s had one hell of an afterlife, and is always rightly feted as one of the greatest and most influential rock ‘n’ roll songs ever recorded.