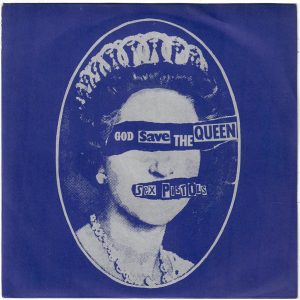 It starts with a rip-roaring near-rockabilly riff — with the guitars turned up to 94, of course — from Steve Jones, accompanied by Paul Cook smashing, rolling and building and after they establish the main riff, Johnny Rotten is off.

I mean. What can you even say about that? At this point Queen Elizabeth had been on the throne for a quarter-century, and the whole country was about to celebrate that fact, but instead Rotten is telling the punters that the Royals are fascists who aren’t human and who not only making you stupid — his trilling of the “r” in “moron” is gobsmackingly fierce — but stealing your future.

Of course written like that, it sound like a Doctor Who plot, and is crucially missing the amazing Steve Jones rhythm guitar part which basically responds to every single line. Not that Rotten gives a shit, he’s too busy continuing his rant.

Whoo boy, that’s some pretty heavy shit — the sarcasm just drips from the mic when Rotten sings “we mean it, maaaaaaaan” and given that the song was originally called “No Future,” you could posit that it wasn’t as much of an attack on the Queen as a person, but rather the Queen as symbol of a Britain that Rotten saw in deep decline.

Or not. Either way, Rotten’s quick “hah” after he sings “our figurehead” is one of those details that once you hear, you can never unhear. Meanwhile, the rest of the Sex Pistols — even Sid! — are supporting Rotten’s ranting by staying on top of every word, every beat, every utterance. There’s even a cool stop-time part just before that verse, just to remind you that, oh yeah, there’s a band supporting all of this madness.

Meanwhile Rotten just keeps piling on, opening up the final verse with an absolutely chilling question.

Oh when there’s no future
How can there be sin?
We’re the flowers
In the dustbin
We’re the poison
In your human machine
We’re the future
Your future

Of course, he doesn’t do anything so gauche as providing an answer: “God Save The Queen” is all about raising the questions. Though I guess, now that I think about it, it could be posited as the reason that they needed anarchy in the first place.

But of course, you don’t have do all of that thinking about what it all means if you don’t want to — not when Steve Jones utterly storms through the late guitar break after the second chorus, building up to a repeat of the first verse, and of course yet another utterly smashing — and totally catchy! — outro. Everybody sing along:

With Paul Cook setting up every single “no future” with a cool double smash of his snare drum & crash cymbal, the whole band singing in the background — I love how they come in just slightly late each time — and of course, Rotten’s howling “noooooooooo fuuuuuuu-tuuure” getting more and more desperate with each repetition, it’s also as chilling as it is catchy.

It’s fun to sing about how we’re all totally fucked!!!

And 45 years later, with the Queen alive, if not necessarily kicking, and environmental apocalypse seemingly imminent, yelling “no future for me” is still kinda apropos.

In any event, “God Save The Queen” was a massive smash in the U.K., making it to #2 on the official charts — and a lot of people thought that it was really #1 (where it landed on the N.M.E. charts, but the chartmakers couldn’t have something so subversive as the biggest song in the country), and sent the Pistols into a stratosphere of utter madness, where everything just got weirder and crazier.

“God Save The Queen”


“God Save The Queen” Video