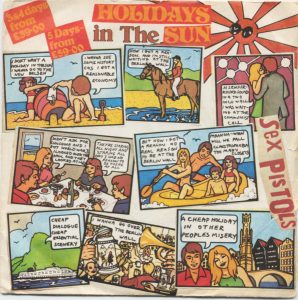 Anyways, I waited until 1979 to finally purchase Never Mind The Bollocks, Here’s The Sex Pistols and hear the opening jackboots Paul Cook kickdrum leading into Steve Jones guitar lick of “Holidays in the Sun” as it came roaring out of the speakers with an riff that was familiar, but not because it stole from The Jam’s “In The City,” but because it stole from — and completely recontextualized — the “if you want to dance with me” part of Chuck Berry’s “Rock ‘n’ Roll Music.” Meanwhile, after muttering “a cheap holiday in other people’s misery,” Johnny Rotten roars out of the gate with a voice I’d never heard before.

Oh god the singing here is off the charts fantastic. The way that Rotten adds an extra syllable to “sun-uh” and “Belsen-uh” and trilling at the end of “hi-stor-rrreeee” is utter fucking genius, and, as always Steve Jones is an ever-changing monster underneath, alternating rumbling chords with hooky riffs and is also part of the backing chorus of death chanting “reason reason reason reason” as they all storm into the chorus.

So, yeah, the Berlin Wall — which started going down only a dozen years after this song came out — might date “Holidays in The Sun,” but you kiddos look at your wikipedias and such to realize that it was a flashpoint in the Cold War and that’s why it attracted Rotten. Also, check out Paul Cook’s drum build just before Rotten chants “the Berlin Walll”

Rotten’s mangling of that last “meeeeeeeee” is pure pure gorgeous insanity. After the second chorus, Steve Jones takes his first solo which is just basically him trading some squealing licks with the main “if you wanna dance with me” riff. It’s really just to give Rotten a chance to gear up to the next verse.

And as Rotten sings “Ber-linnnn wall,” Paul Cook does a snare stop-build and Steve Jones hits an absolutely massive chord that shakes the whole song to its core, and Rotten, who has just been standing there, staring, is sudden compelled to act.

This is followed by an absolutely storming Jones guitar solo, just slamming chords and notes against each other like he’s trying to lift Rotten over the wall. It’s as short as it it’s amazing.

In the coda Rotten is ranting and raving about going under the wall over the wall, not even really understanding why he’s doing it, but not really caring because his anger is an energy in and of itself while Jones and Cook (no Sid here) thrash mercilessly. It’s incredibly over-the-top, but when at the end, Rotten pleads “please don’t be waiting for me,” you realize that that’s probably pretty good advice.

“Holidays in the Sun” was the fourth single released prior to Never Mind The Bollocks, Here’s The Sex Pistols, and like the two previous singles — and four(!) from The Great Rock ‘n’ Roll Swindle — it hit the top ten in the U.K., stalling out at number 8. It’s weird to think that the Sex Pistols had an imperial singles phase, but they really did. Of course, it wasn’t released as a single here in the States, but it did serve as a powerful introduction for curious kids like me.