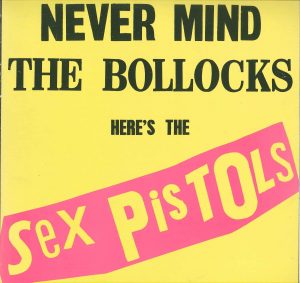 And while “E.M.I.” isn’t quite on the same level as “Complete Control,” it’s still a perfect way to close out Never Mind The Bollocks, Here’s The Sex Pistols, with an almost Ramonesy guitar line from Steve Jones opening the song.

There’s unlimited supply
And there is no reason why
I tell you it was all a frame
They only did it ‘cos of fame
Who?

And so E.M.I. was the big label that signed the Sex Pistols. Fun fact: nearly all of the biggest U.K. punk bands signed to major labels. And E.M.I. was the label that released “Anarchy in the U.K.” and then dropped them like hammered shit after they cursed on live TV. Rotten’s point was that E.M.I. had only signed them to make money, which, yeah that’s what labels do. Meanwhile, Paul Cook’s builds underneath Rotten’s chants of “E.M.I” are perfectly brutal.

That said, it was pretty shortsighted of E.M.I. to dump them because Steve Jones called Bill Grundy a “dirty fucker,” which made them instant folk heroes. But they did.

But it’s the contempt of a sore winner, especially since they almost immediately got signed to Virgin — after a quick dalliance with A&M — so Rotten is also actually having a lot of fun on the song, cackling throughout, and turning on his most angry mode for the bridge.

And sir and friends are crucified
A day they wished that we had died
We are an addition
We are ruled by none
Never!
Ever!
Never!

But that’s one of things about Never Mind The Bollocks, Here’s The Sex Pistols: Johnny Rotten gives one of the greatest vocal performances on any record ever, and “E.M.I” is a microcosm: trilled “r,” extra syllables at the end of each line, and his amazing holding out of “nooooonnnnnnnnnnnnnnnnnne” followed by the screams of “never! ever! never!” leading into one last great Steve Jones guitar solo where he plays call-and-response with himself which leads into the amazing elongated third verse.

And you thought that we were faking
That we were all just money making
You do not believe we’re for real
Or you would lose your cheap appeal?
Don’t judge a book just by the cover
Unless you cover just another
And blind acceptance is a sign
Of stupid fools who stand in line
Like

Steve Jones has said that his favorite part of making Never Mind The Bollocks, Here’s The Sex Pistols was doing all of the guitar overdubs, and throughout this last verse Jones continues to add sound effects, weird feedback, random notes and noise: I don’t know what I love more, Rotten’s phrasing of “money making” or the little telegraph noises Jones adds after “cover just another,” so call it a tie.

And, of course, one last song, one last great coda, featuring the rest of the band joyfully shouting “E.M.I.!” while Rotten goes into full diss mode.

And that’s a wrap on Never Mind The Bollocks, Here’s The Sex Pistols, one of the greatest and most important records ever. Shortly after it came out, the Pistols did their tour of the U.S. — if you can find the documentary D.O.A: A Rite of Passage, check it out — and Rotten quit, throwing everything somehow into more chaos.

After that, everybody went on with their lives — well, not Sid, I guess — and have spent the 40 years since trying to come to terms with what happened, even occasionally reuniting and touring with Glen Matlock back in the fold. It’s all out there, and I’ve watched the films, bought many of the records, and read some of the books, coming to the conclusion that this record is all I need.