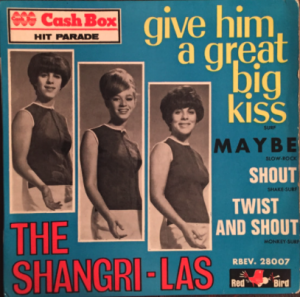 That opening was of course stolen wholesale by David Johansen for “Looking For a Kiss” from the first New York Dolls album. On their second album, of course, the Dolls hired Shadow Morton, who wrote this song and produced the Shangri-La’s, to be the producer, no doubt because they wanted to emulate the non-stop good cheer of this record.

Most of the song is Weiss talking about how much she likes her guy, while the Margie & Mary Ann Gansler are egging her on with handclaps — hoo boy does this song adhere to The Handclap Rule! — plus “oooohs”. “da-da-da-das” and “tell me moress”, always leading to a fantastic stop-time chorus where they stomp their feet in time to the beat while declaring.

Gonna walk right up to him
Give him a great big kiss
Mwah!

That “mwah!,” which is accompanied by a cool drum roll restarting the song, just kills me every time, as does the two dialog parts in the middle of the song.

The Gansler twins’s tone on “Well I hear he’s bad” is awesome, and of course the whole “good-bad” description could be about candy-eater now-dead Jimmy from “Leader of The Pack.” Even better is the bit of dialog at the end, suggesting that there could be more than a kiss in their future.

The pause that Weiss takes before finally confesses “close, very, very close” is great, like she’s trying to figure out how much to actually tell her friends about it, but finally decides to in a way that indicates she’s just fine with that.

“Give Him a Great Big Kiss” wasn’t as big of a hit as “Leader of The Pack,” only making it to #18 on the charts, but I think its combination of good cheer and agency has made it age better for me.

“Give Him a Great Big Kiss”