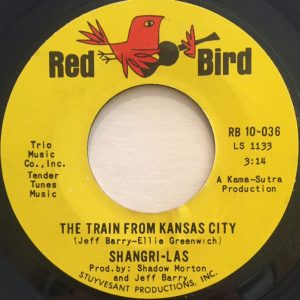 Because it was produced by Shadow Morton, “The Train From Kansas City” starts off with the sound of a train rolling over some ominous echoed piano chords, over which Mary & Betty Weiss and Mary Ann and Margie Gansler sing the opening almost round robin.

(Baby, baby
Please believe me
(I would never never do anything to hurt you)

Baby, baby
Please believe me
I would never never do anything to you
To make you blue

By the end of this, Mary Weiss has emerged as the lead vocalist, who continues to sing while whomever the session drummer is plays what signifies as a psychedelic drum beat in the background, alternating a single snare with a triple snare on each backbeat. It adds more than a bit of dislocation to the confession that Weiss is making.

And then after the saddest-sounding train whistle you’ve ever heard comes in, they launch into the chorus, the drummer playing a straight beat.

There is a trainload of greatness on this chorus: the lovely harmonies, the tambourine off-beat, and a melody for the fucking ages, all of which add to the sadness and inevitability of the situation Weiss finds herself in. Nearly done in by her own procrastination, and now having to worry that not formally ending her old relationship is going to mess with her new one.

This time, when the train whistle blows, it pretty much sound like the wail of a broken heart, especially as the ominous piano chords start back up for a bit after the second chorus, whereupon Weiss explains how we got here over just a tambourine and the other Shangri-La’s “oohing” and “aahing” for support.

In 2021, it could be an “Am I The Asshole?” situation: “I (F 20) went away to college and met a new boy (M 22,) fell in love and now we’re engaged. Because I still have love and respect for my old boyfriend (M 20), I haven’t told him, and haven’t responded to any of his messages. And now I’ve found out that he’s taking Amtrack from Kansas City to come see me. Am I the asshole for waiting to tell him in person?

Also, should I tell my fiancee in song?”

On the other hand, it’s still not as bad as what happened to Waldo Jeffers in future Certain Song “The Gift.”

And there’s one last stop-time as Weiss sings the final “nothing I can do to make it turn around,” and for a second, you think that the song might be ending right there, but no. Because the moment of truth is at hand.

One of the great, brutal things about “The Train From Kansas City” is that it sets up this situation, but never tells us what actually happened next. That would almost be too much, I guess.

How much do I love “The Train From Kansas City?” How about this, it was written by the songwriting team of Ellie Greenwich and Jeff Barry who were responsible for such heavyweights as “Then He Kissed Me,” “Be My Baby,” “Leader of the Pack” and “River Deep, Mountain High,” and I think it blows all of them away.

“The Train From Kansas City”