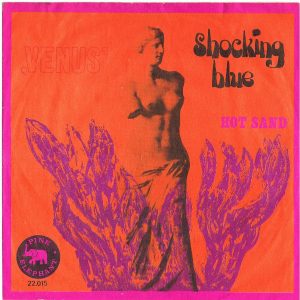 In 1992, after I went back to Nirvana’s debut, Bleach, it was pretty obvious that one of the standout tracks was “Love Buzz,” and that “Love Buzz” — which really didn’t sound like anything else on Bleach — was a cover written by someone named Robbie van Leeuwen, which further research told me was the songwriter for a band called Shocking Blue.

Wait. Shocking Blue, that seemed familiar. Who was that again? Oh that’s right, they were the band who did that song “Venus,” which was all over the AM radio when we were kids. That’s right. I remember now. They were like, Dutch or something Man, I haven’t heard that song in a long time.

But it wasn’t like “Love Buzz” sent me scurrying back to rediscover Shocking Blue in 1992, — not the way his versions of “Molly’s Lips” sent me to check out The Vaselines and so “Venus” remained a vague memory until a few years ago when I decided to check out 1969’s At Home, the album that “Venus” eventually ended up on. I don’t remember why I decided to do it, but I figured what the hell.

And you know what, At Home turned out to be a pretty good psychedelic pop album. Nothing world-shattering, but highly enjoyable, nevertheless. That said, “Venus” is a pretty fucking great song, easily the highlight, and I appreciated it much more as an old than I did as a youth.

“Venus” opens with a van Leeuwen guitar fanfare that isn’t so far off from Pete Townshend’s opening of “Pinball Wizard,” and then almost instantly settles into a hypnotic keyboard riff played by session man Cees Schrama, over which recently-added singer Mariska Veres sings:

Like Grace Slick to the Jefferson Airplane — and later on Fergie to the Black-Eyed Peas — Veres wasn’t part of the initial conception of the band, but van Leeuwen decided to augment the all-dude format more maximum commerciality, and it made all the difference. Veres had a huge, commanding voice, and so when she went into the chorus, backed by van Leeuwen shouting the background, it was irresistible.

This is followed instantly by what sounds like a slide guitar solo by van Leeuwen, which sets up the second verse.

Her weapons were her crystal eyes
Making every man mad
Black as the dark night she was
Got what no-one else had
Wow!

Veres’s hoarse “wow!” as the rest of the band perfectly executes a stop-time turnaround into the chorus is magnificent, as are her “ahhhhhhhs” after the second verse. It’s a fantastic vocal performance that almost overshadows how strange the arrangement is. Almost.

“Venus” was a massive massive hit single all around the world, but at least here in the U.S., it was the only time that Shocking Blue even came close to a hit single — the follow-up, “Mighty Joe,” stalled out at 43, and while Shocking Blue cranked out tons more singles and albums in the next several years, here in the U.S. they were quintessential one-hit wonders.