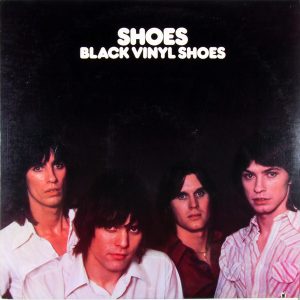 We’ll dig into this more tomorrow, but the thing about Black Vinyl Shoes, of course, was that it turned its potential weakness — the fact that was was recorded in a living room (by elves, Robert Christgau joked in his A- review) — into its strengths: the whole record was filled with atmosphere and hooks.

And no song had more atmosphere or hooks that Gary Klebe’s “Not Me,” which burst into life from what sounded like an abrupt tape splice with Klebe’s deep, jangling 12-string acoustic guitar and what sounds like a cowbell on every single beat, which made up for the fact that the only things you could hear of Skip Meyer’s drums was the kick and snare.

Over all of this, Klebe is describing a hard-to-shake crush with his impossibly high voice double-tracked and echoed.

And with a Meyer drum roll, Klebe then breaks up the double track for the chorus, his voice tumbling over itself while Jeff and John Murphy provide “ooooohs” in the background.

The first chorus is followed up by even more hooky goodness: a four-note sustained guitar lead by Jeff Murphy, which floats over the next part of the song like a ghost from the past.

I answered the phone, said hello
What a way she has with words
All the times I thought I knew her
What a way to say goodbye

I mean, of course, it wasn’t going to work out, because if it did, we wouldn’t have gotten a couple more iterations of the chorus, this time with more fuzzy, hooky guitar slowly taking over as Klebe fades into the stolen night.

Oh. Did I mention that all of this happens in 2:24? An entire universe in less than two-and-a-half minutes.

I actually bought Black Vinyl Shoes after I bought Present Tense, which I probably ran out and got about 30 seconds after I heard “Tomorrow Night” on the radio. But it wasn’t until Christmas 1981 before I could find a copy of Black Vinyl Shoes at Tower. And “Not Me” immediately floored me. Just fucking killed me. Had KFSR been on the air then, I would have played it obsessively. Instead, I put it on mixtapes and waited until KFSR went on the air to play it.