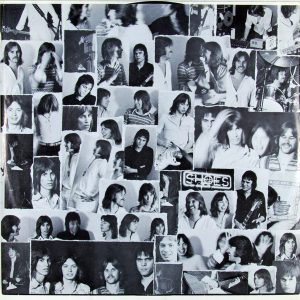 While these days, it’s much more common to record music in your living room, bedroom, basement, any damn place but an actual recording studio, back in the late 1970s, it was much more rare.

Which is part of the reason why Black Vinyl Shoes — the first album by Zion, Illinois’ Shoes — made such a stir.

Of course, that wasn’t the plan. The plan was to make a demo in guitarist Jeff Murphy’s living room and shop it around to get a deal to record their songs in an actual studio. But PVC records liked the fuzzy, compressed sound so much, they decided to put out the home-recorded demo as an album, and it eventually got Shoes a major-label deal with Elektra.

And why not? Black Vinyl Shoes kicks off into high gear with a roll from drummer Skip Murphy as bassist John Murphy hoarsely croaks the opening verse:

I get cold
I get shivers up my spine
Baby, lead me where it’s warmer
Ride you in my car
Make you feel some older

This is all set to thick muddy stew of Jeff Murphy and Gary Klebe’s echoy blissed-out guitars and vocals and an overdubbed shaker that is actually louder than the actual drums. It shouldn’t work, but it totally does, especially when they go into the chorus.

At the fade, they all sing “ah-ah-ah-ah-ah-ah-ah” that fades into the background behind the guitars and the shaker and the result sounds so unique, so cool and — most importantly — so catchy that you honestly couldn’t imagine the song sounding better had it been properly recorded. And I’m sure they were tempted to do just that when they got signed to Elektra, and kudos to them for resisting that temptation.

(Of course it was probably easier to resist that temptation when they had songs like “Tomorrow Night” and “Too Late” ready to go.)