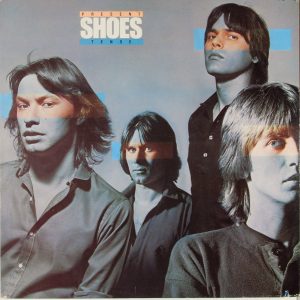 This is, of course, the first Shoes song I ever heard — no doubt on KKDJ — and I instantly fell for it. I mean, how could I not, given that I was going through a massive period of power pop discovery at the time; digging records by The Paul Collins Beat, 20/20, SVT, Headboys etc etc.

But at the time, “Tomorrow Night” was the absolute pinnacle — the greatest power-pop song I’d ever heard — and even though I now (barely) prefer things like “A Million Miles Away,” “She Bangs The Drums,” “September Gurls“, “The Shiny Unfeeling” or even the Shoes own “Not Me,” all of those songs were still in my future, whereas in the spring of 1980, “Tomorrow Night” was right there in front of me.

And so, at that time, I had no idea that Black Vinyl Shoes existed, or that “Tomorrow Night” had originally been released as an 7″ single on Bomp! records in 1978, and that the re-recorded version on Present Tense was bigger and fuller than that one, without even a hint of overproduction.

I can’t show what I feel
Do you know what I mean?
I get restless inside every night

Yeah, I know, the lyrics are nothing to write home about, but who cares when the guitars are so totally interlocked and the rhythm section of John Murphy and Meyer are so perfectly locked in and the vocal arrangements are so sublime, especially on the chorus with John Murphy & Gary Klebe lean in with gorgeous “ahhhhs” and “oooooooohs” as Jeff Murphy declares his horniness.

And in fact, you might be concentrating so hard on those harmonies, you miss the subtle builds that Meyer adds to the proceeding, as well as his work on the post-chorus instrumental breaks where he delays the backbeat while the guitars crunch against each other in such a way that it’s always a relief when the jangle crashes back in, especially during Jeff Murphy’s quick near-synthy fuzzy break after the second verse.

In the end, they take those instrumental breaks and turn them into the background to an absolutely beautiful ending, Jeff Murphy still trying to get his hardon on as Gary Klebe and John Murphy keep gorgeously taunting him “tomorrow night.”

I mean, by this time, of course, I’d fallen hard for The Byrds — both Fifth Dimension and Younger Than Yesterday were utter staples — and “Tomorrow Night” had the same vibe as classic tracks like “I See You,” “Why?” and “So You Wanna Be a Rock and Roll Star!” You know, the greatest fucking sound in the world.

In anything resembling a just world, “Tomorrow Night” would have broken Shoes in the same way that “Cruel to Be Kind” broke Nick Lowe and “My Sharona” broke The Knack. I mean, it was the same year, so the conditions were as ripe as they were ever going to be. But, noooooooo! It went absolutely nowhere. What the hell, people?