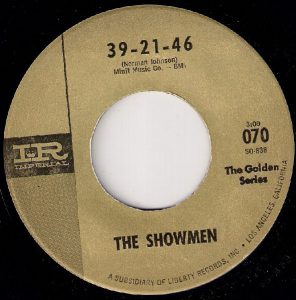 I first came across “39-21-46” on a late-90s Rhino compilation Beg, Scream and Shout: The Big Ole Box of 60’s Soul, which is exactly what is says it is: 144 songs that are a great jumping off point for getting into this music, as nearly all of the great soul artists are represented. And if there isn’t enough Motown or Stax here, well, they have their own box sets, don’t they?

Anyways, it was on Beg, Scream and Shout where I first heard The Showmen’s definitive thirst song, “39-21-46.” The Showmen were a New Orleans based group that walked the line between R&B and Doo-Wop, as evidenced by the vocal arrangements on “39-21-46”

And of course, everybody else wants to be with her, as well, and in the chorus, we find out why.

Ahh, of course. For all we know, he hasn’t even met her. He just likes here because she’s a total smokeshow.

With the help of this page, I discovered that Johnson had written the song as a 14-year-old, and it was originally called “You,” and then “39-21-40 Shape,” but when it was actually released as a single, the record company printed it up as “39-21-46.” Whether that was a mistake, or canny marketing is lost to the ages.

What isn’t lost to the ages is Johnson’s utterly sublime vocal performance throughout, especially his “ah-ha-ha-ha-ha-ho-ho-ho-ho” at the end.