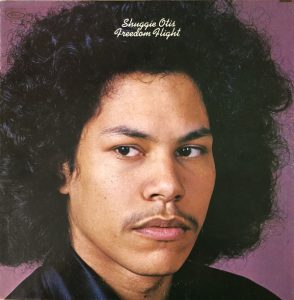 Shuggie Otis’s version of “Strawberry Letter 23” came to me in a roundabout way. Because his version wasn’t a hit single back when it was released in 1971, the only version I was acquainted with was the 1977 hit single version by the Brothers Johnson, which apparently happened because one of the Brothers was dating Shuggie’s cousin.

That version was a massive hit, making it to number #5 on the Billboard pop charts and #1 on the Billboard R&B charts. Still, it wasn’t until 2001 when finally heard Shuggie’s version, and that was on a reissue of his 1974 album, Inspiration Information where they tacked on four tracks from Freedom Flight, including “Strawberry Letter 23.”

Confused? I was. The narrative was that Inspiration Information, which only made #181 on the Billboard album charts in 1974, was a lost psychedelic soul classic. Which is was. But it seems to me like the same could be said for Freedom Flight, based on the quality of those tracks. So maybe they could have re-released both albums. When I get a time machine, I’ll go back to 2001, and the first thing I’ll do is convince David Byrne, whose Luaka Bop label did the reissue, to do both records. I can’t think of anything that would be more important to do in 2001.

Anyways, Freedom Flight was produced by Shuggie’s father, Johnny Otis, and they recruited some heavyweights to play on the link, like keyboardist George Duke and Santana drummer Aynlsey Dunbar.

However, none of those guys were on “Strawberry Letter 23” which looks like it was completely done by the 18-year-old Shuggie Otis, including the keyboard part — which I think is a glockenspiel unless it’s a celesta or something else entirely — which is probably the main hook of the song, instantly setting up the melody of the song, which echoes the hook and also works with the hippie-dippie love lyrics.

Hello my love, I heard a kiss from you
Red magic satin playing near, too
All through the morning rain I gaze, the sun doesn’t shine
Rainbows and waterfalls run through my mind

Otis runs through the lyrics like he’s almost embarrassed by them, until he gets to the point of the song — they’ve been sending strawberry letters back and forth, and he’s responding to the twenty-second letter with this song.

But of course, what’s he’s responding with his the guitar solo that takes up the back third of the song, a billowing double-tracked psychedelic whirl that twists in and around itself and keeps going and going and going and going and thousands of echoed Shuggies are going “ahhhhh” in the background and heaven’s own bells are ringing.

It’s a remarkable thing, that guitar solo, which keeps going after even Shuggie the drummer has stopped and even though the song itself fades out, the guitar solo is still out there, doing its thing.