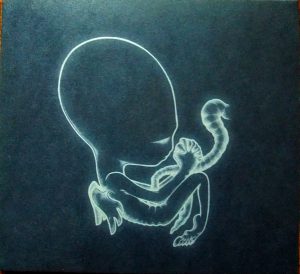 So, you can look all of that stuff up in terms of what the song means, I’m just going to bask in the massive soundscapes created by singer-guitarist Jón Þór Birgisson, AKA “Jonsi” (like Mick Jones of the Clash!), who got unearthly sounds out of his guitar by playing it with a cello bow (like Jimmy Page), and even more unearthly sounds out of his mouth, sporting a falsetto that sounds like aliens trying to communicate back to us.

So, I lied not looking shit up. Because of course there is a massive melodic hook to “Svefn-g-englar,” and, even though its in Icelandic, it’s close enough to sounding like “it’s youuuuuu” that I’m guessing that a lot of folks think that’s what it is, I had to check to see what he actually was singing, and it’s this:

And apparently “tjú” is a sound Icelandic people make to comfort infants, like the angel embryo on the cover, I guess.

In any event, even if you don’t think so, you’ve probably heard “Svefn-g-englar” before, because it’s been used in many many films and TV shows, most famously, Vanilla Sky, but a whole bunch of others, as well.