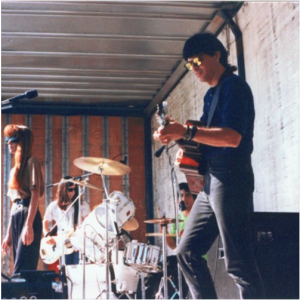 The Similar Animals origin story is that guitarist Don Ramirez, bassist Stephen Guillen & drummer Joey Puente had formed a band, but Don & Colleen DeKoning were working together, and at some point Don invited Colleen to band practice — as you do — and very soon, she became the lead singer. Eventually Stephen left, and was replaced by Kurt Tindle, who was eventually replaced by Joseph.

To my ears, Similar Animals leaned on the folk-rock side of things — which is reductive for a band who did a helluva cover of Dramarama’s “Anything Anything” — relying on Colleen’s gorgeously huge vocals and Don’s ridiculously versatile guitar playing. They also harmonized like a dream, as you might be able to tell from “Letters and Magazines,” one of the demos they cut in either late 1989 or early 1990.

“Letters and Magazines” starts with Don’s fuzzy, phased guitar fading in, and as drummer Joey Puente starts a slow, stately beat — ironically, for all of the bass players, Don is overdubbing bass as well — Colleen starts singing about the end of a toxic relationship. 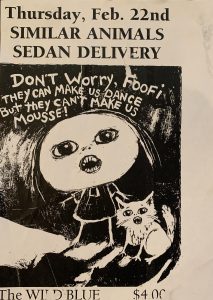 One of the things I like about “Letters & Magazines” is that it takes its sweet time. That’s one verse there — check the rhyme with “head” and “said” but there’s some serious time in between each couplet, making you think about it maybe a bit more than you might like to.

I just love her emphasis on “center” when she sings about “sitting in the center of a storm” By this point Don has come in with his harmonies, shouting them in the background, adding an extra layer of sadness to the chorus, which was simply this.

At no point does Colleen offer anything else: why in her dream she did it, what she might have found, how she felt about the action. Just this:

That second chorus comes after a long, long, lowdown guitar solo from Don, at first leaving a lot of spaces between every note as it meanders through a verse as well as a chorus, finally ending with the only flashy thing from Joey the whole song, a really long and cool around-the-kit drum roll.

You tell the Earth to shake, and it shakes
And I’m not the one say it can’t be so

It’s just an incredibly sad song all around.

Most of the people who read this already know that my old frenemy Colleen unexpectedly passed away earlier this year — way way too fucking young — and I don’t know if that fact makes “Letters & Magazines” that much more sadder, but it makes this post that much more sadder, at the very least. Hopefully, she’s in a place with plenty of cats & dogs and where no one eats meat.