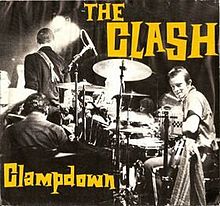 And then there’s “Clampdown.” Full of righteous fury and anger, and driven by a Topper Headon beat that shouldn’t possibly work, “Clampdown” is probably the closest thing musically to their early days. And by “early days,” of course, I meant “just a few months prior.”

I remember reading a Joe Strummer interview (probably in CREEM) just prior to London Calling where he was talking about how they were going to expand their music, and so even a song like “Clampdown” sounds different — guitars mixed down or doing subtle things, organ prominent, weird percussion effects — than it would have on the previous records.


But of course, the words are sharper than ever.

And so while I missed the full-throated guitar attack, I loved discovering all of the things that replaced it: the harmonies of Mick Jones, Topper’s tricking out of the simple-sounding beat, and Paul’s bass hooks. This might not have been as visceral as “Safe European Home” or “White Riot,” but it was every bit as powerful. Especially live.

In fact, I think my first warming up to London Calling as an expansion of their universe as opposed to a retrenchment of their sound was when I saw The Clash play these songs on the NBC TV show Fridays. Especially “Clampdown.” With Joe’s guitar emblazoned with “I many take a holiday” and Mick doing his loose-guitar dance, as the coda descends into spacey punk-dub, it reminded me that there was still nothing about this band I didn’t love.